On Saturday 7th around sixty people marched down London’s Stoke Newington Road to Hackney Town Hall in protest at the council’s neglect of Hackney residents in temporary accommodation, who are subject to very low levels of maintenance and poor hygiene as well as expensive rent. After speeches by residents outside the Alexandra Court Hostel describing the bad conditions (as detailed below), we marched through the streets. The protest was organised by the London Coalition Against Poverty, whose appeal for the protest is reproduced at the bottom of this piece. 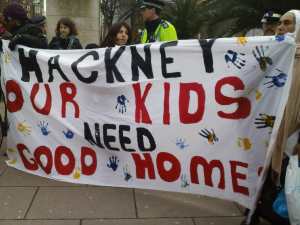 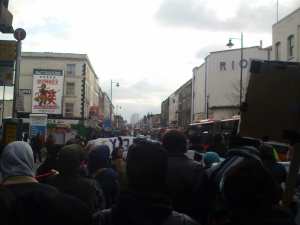 We marched in the road, distributing leaflets to passers-by and chanting

The police had let us march in the road, but blocked us from the steps of the Town Hall. Nevertheless, we shouted slogans denouncing Hackney Mayor Jules Pipe and Labour councillor Alan Laing for their indifference to bad housing in the borough.

Hackney Council has disrespected their temporary accommodation tenants. They have to put up with:

Nearly 7,000 families in London live in temporary accomodation such as this.  They are London’s hidden homeless; most often young families.  Stays are often lengthy; one family in Alexandra Court has been living there for two years.

After several letters and delegations of residents complaining to local councilor Rita Krishna and the Temporary Accommodation services management little has changed. Join with temporary accommodation residents this Saturday to demand good housing for all!

One thought on “protest for decent housing in hackney”