On the evening of 13th February the Socialist Party and Respect Renewal held a joint meeting in London on the recent wildcat strikes by construction workers across Britain. Apparently the only significant meeting on the strikes taking place in the capital, the meeting was led off by Lindsey Oil Refinery strike committee member Keith Gibson (SP) and the left candidate for general secretary of the Amicus section of Unite, Jerry Hicks (RR). The meeting was a mix of interesting and informed commentary and sectarian jibes. 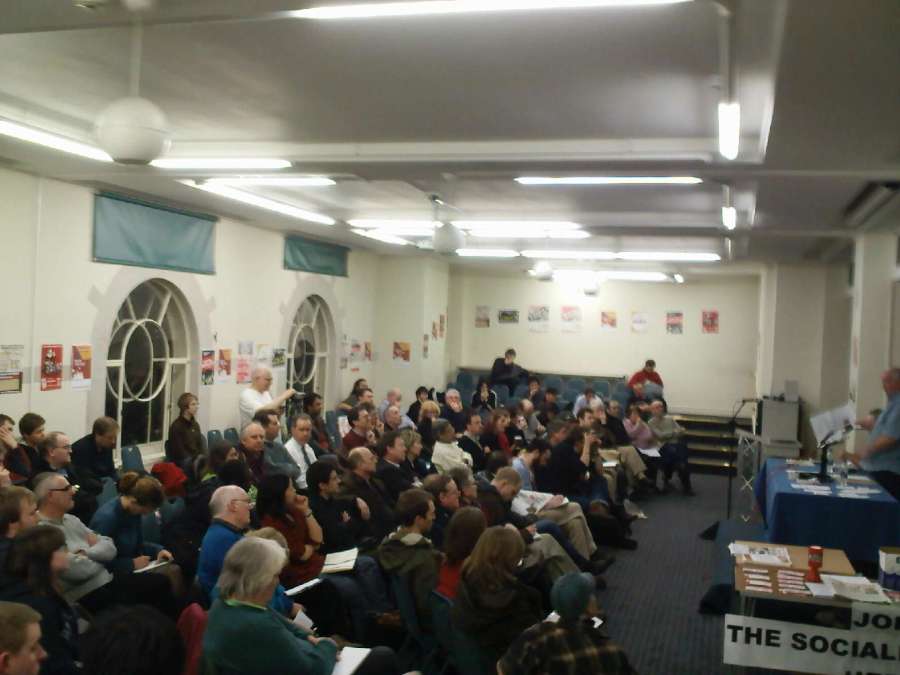 Speaking to a sixty-strong audience, Keith Gibson gave an interesting talk on the background to the dispute and how workers had argued that the strike was not a national or race issue, but one of class. The employer had sought to divide the workforce by keeping the Italian migrant workers on barges away from their local counterparts, and the media had played up the significance of nationalist elements, but he had been able to appeal to internationalist sentiment. When some people went to intimidate the Italian workers in the barges, strikers had broken up their demonstrations, while the BNP were chased off picket lines upon their arrival.

Comrade Gibson explained how the shop stewards had all resigned at the outset of the strike in order to avoid legal action: however, it was not quite clear whether the strike committee was composed of a fresh layer of shop stewards (including himself) or the resigned stewards. He did however – correctly – point to the strikers’ welcome achievement in smashing through the anti-union laws and mounting a serious campaign for jobs regardless of bureaucratic and legal niceties. Admitting that there were nationalist elements in the movement – arising spontaneously from the vacuum of union direction rather than any outsider/BNP influence – he argued that the best place for socialists to be was within the movement, taking it forward rather than standing on the sidelines.

These themes were echoed in Jerry Hicks’ talk, in which he also lambasted general secretary Derek Simpson’s open pandering to the sentiment of “British Jobs for British Workers”.  Hicks said that in his campaign he had found there to be a large consistency for bread-and-butter ‘socialist’ policies of resisting the anti-union laws and opposing privatisation, although apart from pointing to Simpson’s hypocrisy and inaction in this regard, he did little to draw sharp political lines, and for example did not explicitly call for disaffiliation from the Labour Party as such, rather “only supporting those candidates who support our policies”.

Thus far the talks were interesting, with comrade Gibson in particular providing a lot of background to previous demonstrations at oil refineries where police would not allow more than six pickets, and detailing the change in mood. He repeatedly stressed the importance of listening to the workers in dispute and their concerns rather than the media spin on events.

However, the level of discussion slid considerably during the debate from the floor, with a contribution from a member of Workers’ Power, an orthodox Trotskyist group who have condemned the strike, sparking a spate of mud-slinging. Oddly given that it was their own meeting, speaker after speaker from the SP responded to the WP comrade in angular fashion, while Workers’ Power’s invocation of the Socialist Workers’ Party as a group taking a “correct” position (i.e. similar to their own) provoked an SWP member to stand up and express a confused position on the strikes wavering between support and opposition. Of course, really supporting the strikes would mean including calls for them to spread, not just abstract anti-capitalist and anti-nationalist rhetoric, but the comrade launched an attack on an RMT activist who had earlier commented that those who oppose the strike “wouldn’t know a proletarian struggle if it bit them on the arse”.

Meanwhile, the SP raised basically correct criticisms of Workers’ Power’s opposition to the strike, but this was always couched in sectarian language brimming with “Leninism” –  referring to “ultra-leftists”, “moving forward from existing consciousness”, “the leadership of conscious socialists”, and so on. Indeed, fitting the Socialist Party’s broader project of the day, comrade Gibson’s speeches at the beginning and close of the meeting had laid unduly great stress on the necessity of a new workers’ party:  this seemed very mechanical, particularly given that securing the organisational unity of the groups attending the meeting hardly seemed a particularly desirable aid for effectively ‘intervening’ among a group of workers who had, after all, already been successful without such help.

The low level of discussion from the floor was a pity given the rich experience so recently enjoyed by comrade Gibson in the dispute, and while all speakers were at pains to congratulate him on his efforts, the meeting certainly did not seem well placed to take actions forward from the oil refinery dispute and build campaigns in other industries. The best lesson of all, of course, has been the workers’ ability to break through the anti-union laws, which many a “left” trade union general secretary has previously used to excuse their inaction, and in this regard the practical activity of the oil refinery workers will do far more to advance the class struggle in time of recession than a thousand sermons from any “theorist” of the left.

One thought on “report on oil refinery strikes meeting”