On the wings of Seattle, the Zapatista rebellion in the Mexican state of Chiapas and other heights of the so-called “anti-globalisation” (or, more precisely, “alter-globalisation”) movement, by virtue of the failure of the bureaucratic path to socialism, the end of the last century and the beginning of the 21st century witnessed a growth in the popularity of “autonomism”, a more or less crystallised ideology according to which the successful struggle against capitalism presupposes turning one’s back on existing political institutions – the state, parties and elections, as if they will disappear if we ignore them.

In other words, many in Greece and the world nurtured the hope that it was possible not only to overthrow the Greek centre-right government, but also to tear down capitalism, although the anti-capitalist Greek parties – the semi-Stalinist Communist Party of Greece and the socialist coalition SYRIZA, despite very significant recent electoral advances – are far too weak to assume governmental power. But the autonomists do not want that since – despite the historical experience – they believe that there is a possibility of circumventing the existing political institutions and electoral strategy in developed multi-party systems. These are well-intentioned illusions. Even on Iceland, where the financial crisis and protests recently led to the downfall of the neo-con government, the power was taken over by the Social Democratic Party and the eco-socialist Left-Green Movement party.

Although political institutions should not gain control over social movements, participation in these institutions is essential for the growth and development of mass ideological and material counter-hegemony, i.e. for the development of mass support of the population and financial and infrastructural power, and the political influence necessary for confronting the powers of big business and the Right. Naturally, such participation in political institutions must be based on firm principles: consistent democracy and struggle against elitism, formalised forms of control over parliamentary representatives and other politicians by the party base, and responsibility towards the social movements and the wider population. Yet again since May ‘68 in France (the relative failure of which was largely based upon the lack of a sufficiently strong left-wing party with the desire and ability to adequately support the demands of the movement), the recent Greek events show once more the inability of the autonomist strategy to create any lasting mass counter-hegemony at all. 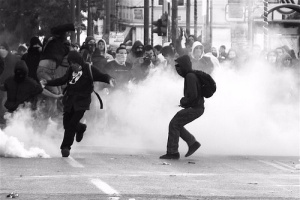 If the army had waged an open war against “street warriors”, it would have been able to sweep them away in a day or two. In any case, I do not wish to equate these two cases but it is indicative that the only thing that the French wave of riots in 2005 actually brought were increased xenophobia, anti-immigrant and rightist propaganda, and the clear victory of the (then) rigid neoliberal “policeman” Sarkozy.

In truth, it is necessary to admit that ordinary vandals, as well as ultra-Right groups, partially usurped the student and worker demonstrations in France. A similar thing occurred in Greece, where it was even documented that the police forces and rightist groups had conspired on campaigns of destruction, for which they then blamed left-wing youth. (This paradigm has already been seen, particularly in the wake of the alter-globalistic demonstrations at the beginning of this century.) Nonetheless, some ultra-left groups assumed a positive, or at least ambivalent, attitude towards vandalism and the “tyranny of structurelessness”, frequently characteristic of the anarchist style of organization, thereby contributing to the creation of an organizational vacuum which made it possible for undemocratic and irresponsible activities, and even the direct sabotage of student protests and occupations, to become equated with the student movement itself. In the absence of clear demands, organization and coordination of one part of the movement, the protestors quickly wore themselves out and their rebellious initiatives were shown to be only one in a series of “radical” – soap bubbles.

It is essential, meanwhile, to emphasize that there is significant common ground between autonomist and progressive and realistic left-socialist (party) strategies, e.g. regarding the commitment for participatory democracy and a certain organisational “horizontalism”, regarding an understanding of the importance of grassroots movements and democratic self-organisation. Moreover, profound changes are not possible without the mobilisation of the citizens themselves, and a bureaucratic path would alienate the most conscious and most combative parts of the population.

Yet the autonomist and anarchist underestimation of the significance of the real level of mass consciousness, the need to work through coherent left-wing parties, as well as of the need to accumulate public support and material strength through elections, and to minimise the chances that the army and police react aggressively – this neglect is disastrous.

“Facts are stubborn things,” goes the saying. Despite these abortive attempts, numerous European initiatives for the creation of broad and combative left-wing parties are showing far more serious results, considerable magnitude, and already a certain stability. Once again, the spectre of creative dissent is beginning to haunt Europe.

6 thoughts on “riots in greece – the “swan song” of autonomism?”