Wednesday 25th saw around 700 students march through London in protest against top-up fees and demanding free university education for all. The demo, predominantly organised by the Socialist Workers’ Party and Education is Not for Sale (involving independent socialists and anarchists but also led to a significant degree by the Alliance for Workers’ Liberty), was the first such demo in the last couple of years, given the National Union of Students’ virtual abandonment of any commitment to free education and its Labourite leaders’ cosying-up to the state bureaucracy, meekly making pleas that the government ought not increase fees beyond £3,000 upon its 2010 review.

Activists from across the country attended the demonstration, but the bulk of those attending were either from Trotskyist groups and their peripheries or a bloc of people with anarchist flags. Although most of the speakers at both the start and end of the protest called for student-worker unity, and many of the slogans advocated support for trade union struggles, in fact there were very few workers on the demo, even from the ranks of the UCU or NUT, since there is in reality little integration between workers’ organisations and the student movement, even its left wing. Nor did working-class students from sixth form/FE colleges attend in strong numbers, although some are building a London School Students’ Union.

Unfortunately, the mobilisation was also weakened somewhat by the fact that there were two separate organising committees (one for each group)… such is sectarianism. Furthermore, the Socialist Party’s shallow front “Campaign to Defeat Fees”, who mobilised several dozen on their contingent but were not really involved in organising the demo itself, voiced the “line” that we ought to use this national demo against fees as a springboard for a… national demo against fees.

Students have of course mobilised en masse in opposition to the Gaza war – 27 faculties having been occupied in the last couple of months – but when asked to protest in defence of specifically university-centred concerns seem to be rather less effective, no doubt in part due to the transitory nature of their spell in higher education and the extreme difficulty of successfully resisting measures such as fees, which cannot be pushed back in any one institution. Of course, more blandly “bread and butter” concerns such as free education should be at the heart of the student movement’s struggles, but it is also the case that so-called “big politics” around such issues as ecology or imperialism are of equal or greater importance for many young people.

Below are some photos and comments on the day: 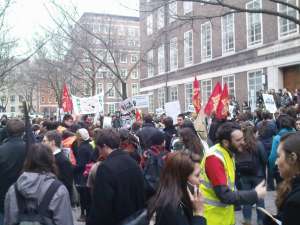 Protesters assembled in front of SOAS around noon. In speeches to the crowd, speakers from Education Not for Sale called for a new national union based on progressive student unions: perhaps a somewhat distant objective, given the vast resources of NUS and the very weak student participation in the structures of even more ‘activist’ SUs. Working both inside and outside NUS may be necessary given the fact that most students have very little awareness of the recent anti-democratic Governance Review, and, of course, student union backing is no prerequisite of effective activism involving students. 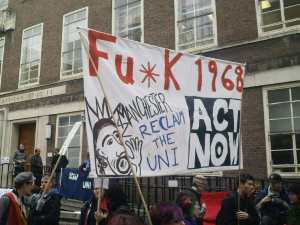 “Fuck 1968: Act Now!”: the constant comparisons of all and every student action to the mass movements of the 1960s by some leftists in NUS does indeed raise rather false expectations about what is likely to be achieved, although it does make it easier for the big Trotskyist groups’ leaders to stir their members to activity. 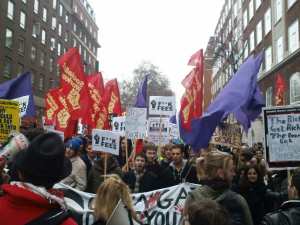 The Socialist Workers’ Party were not always in control of the university occupations in opposition to the Israeli attack on Gaza, reflecting the weakening on their grip over the anti-war movement over the last five years. Although not necessarily at the hub of that wave of student activism, they were out in force at the anti-fees demo. Leading a sit-down of around a hundred and fifty people at High Holborn, two minutes later the SWP organisers then told their members to get up again. This left several dozen people still sitting on the road, causing a minor stand-off with police which saw the march grind to a halt for fifteen minutes. 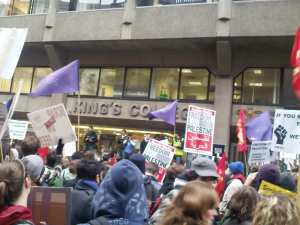 The demo finished with a rally outside King’s College on the Strand.