National elections are underway in the civil service trade union PCS.  In a twist of history an independent left candidate of rank and filist politics is standing against Hugh Lanning, for Deputy General Secretary.   In 2000 the same Hugh Lanning was the candidate defeated by the then independent left candidate Mark Serwotka for General Secretary.   Then the Trotskyist Socialist Party backed Lanning against Serwotka, demanding a re-count when he won!   Today, the Socialist Party are again backing Lanning.

Hugh Lanning is painted as some kind of left candidate who stands up for workers – in reality he is a fake-left rightwing bureaucrat who should have been dumped when the old CPSA moderate group were defeated.  The current hierarchy of the PCS – for all the militant language has failed to match the bosses’ offensive in the civil service with an effective strategy.  Some of the leadership are simply politically bankrupt, careerist opportunists or both.  Aloof and out of touch they are more at home with on a committee or with management than amongst the members.  Much of the responsibility for what has gone wrong in PCS in the years since Serwotka’s victory has been the failure to build an effective rank and file movement and the bureaucratic antics of the Socialist Party, who have little resemblance even to their Socialist Party comrades outside of the Civil Service. 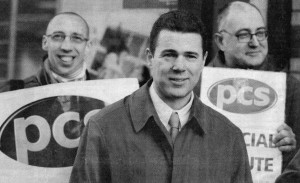 Happier times: six years ago John Moloney (right) and Mark Serwotka were on the same side, at the time of the latter’s election. Now Serwotka is supporting his old rival Lanning against his former ally!

Like most union leaders they no doubt started out as sincere socialists, even Marxists (poor Marx!), no doubt many still are.  But their practice and professed principles are at odds with each other.  The record is one of people who have been worn down by the harsh realities of class struggle and have become disillusioned.  They appear to have abandoned the radicalism of their youth for the middle age comforts of the union hierarchy.  This decline from proclaimed militant principles to bureaucratic paralysis has got steadily worse with every defeat and every sell out.  The disgraceful refusal to back the POA and RMT call for a strike for the Trade Union Freedom Bill at the TUC conference 2008 was symptomatic of this revolutionary rust.

The old traditional left leadership in the PCS has failed. It is a unprincipled lash up of Trotskyists and ex-Stalinist drop outs from the old Communist Party, some of whom are of management grades who, as opposed to rising through the ranks with the rest of the bosses, have rose to the top on the back of the workers through the union machinery.  THERE SHOULD BE NO ROOM IN A LEFT LEADERSHIP FOR THOSE WHOSE ONLY PRINCIPLE IS TO PROMOTE THEIR OWN SELF INTEREST.

Lanning was defeated by Serwotka for the General Secretary post in 2000 by Serwotka, who said, “Hugh Lanning has been in a position of leadership at a time when our jobs have come under unprecedented attack and our pay has declined compared to other sectors.”  Instead of transforming PCS with the memberships’ involvement, the traditional left who became the new leadership in the period after Serwotka’s victory integrated Lanning and his ilk back into the hierarchy.   Now the PCS View can bemoan as it did  in  February 2008:

“There’s not enough [pay], i’ts unfairly distributed, and, worse still, for many of us, the situation is getting worse.”

It is a damning record of the current leadership, of which Lanning is an integral part. The rest of 2008 did not see any improvement – on the contrary it saw a national leadership pulling out of the national pay campaign as fast as it could while below inflation pay settlements were still being imposed across the civil service.

The time for a change in PCS is long overdue. That’s why The Commune says vote for John Moloney against Hugh Lanning. Moloney has a record as a fighting trade unionist  for some 24 years. He:

John Moloney’s record is one of achievement, of creative and imaginative campaigning and negotiating.    Moloney is standing on a platform which includes:

PAY PLEDGE
The big majority of PCS members are on modest incomes. Yet – Mr. Lanning earns over £60,000 a year. Moloney pledges if elected he will not accept more than £25,000 a year (which will be a pay rise for him) and the rest of the DGS salary will be handed back to PCS to spend on campaigning for members jobs and living standards.

PAY
The so-called national pay agreement did not put one penny in the pocket of a single member in 2008 and the national leadership has not gained one material pay benefit in all their years of running the union.   Moloney is for national action, targeted action, selective action, imaginative political and legal campaigning.

Moloney as a socialist has opposed the war in Iraq and is against an attack on Iran, while he supports the ideas of workers’ self-management. Many of these are ideas which communists endorse as part of an overall perspective of the much needed re-composition of the labour movement as a whole.  A victory for Moloney would be a major step forward in PCS. But the lesson of the Serwotka victory should not be forgotten – the need to build a rank and file movement that can transform the union, not just the leaders.

4 thoughts on “pcs: vote for moloney – but independent rank and file action is the key”