On Tuesday March 31st workers at Visteon factories – making car parts for Ford brands – across the UK were told that Visteon Corp could no longer prop up the UK branch, and so they would all lose their jobs with immediate effect. That night a hundred workers at a plant in west Belfast occupied their workplaces, and the next day were followed by their colleagues in Enfield (north London) and Basildon in Essex. We spoke to a number of the workers involved in the sit-in at Enfield, and have gathered some of the occupiers’ comments below. 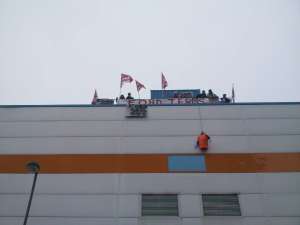 “I’ve been working here for nineteen years. I’ve always been working for Ford and we were Ford workers, but in 2000 this place was farmed out to Visteon. At the time the union signed a deal with the chairman of Ford Motor Company to guarantee all Ford workers the same terms and conditions under Visteon. We had a contract with Ford. They’ve broken it. It’s disgusting. Can’t they see that we had a contract and we need them to stick to it? It was signed by the union – I was at first in the AEU, but now it’s Unite – and what we’re demanding is that Ford sticks by their side of the agreement. We don’t want any trouble – there’s been lots of redundancies before, down from around 1100 when I started to around 220 today – and it was always voluntary redundancies. But that doesn’t mean we’re going to say yes sir, thank you sir, and lie down and let them walk all over us. We’re staying until they honour their side of the deal”.

“This has been handled very, very badly. I’ve been here a long time, a lot of us have worked here a long time: one guy’s been here 41 years. Can you imagine, working here as a young boy, working your whole life and then being told ‘you’ve got no job tomorrow, mate’? Very bad. People have families, they’ve got mortgages, kids to pay for… I can’t just sign on – but I got a letter today for my redundancy claim, but you only get five days to fill it in, and I can’t take the risk I’ll lose any money. They’re giving us nothing, a few hundred quid’s worth, it’s nothing… But it’s not just us and our jobs, this is for everyone. It’s a small seed, but you have to start doing something.”

“Some of us were in the T and G and some in Amicus before it became Unite, but it wasn’t the union running it. The convenor, Kevin Nolan, we’ve not seen him here the last couple of days. I guess you could say it was the Irish factory which gave us the idea. On Tuesday afternoon some of the girls signing on at 2 were told don’t sign in, just go to the training room. Visteon management had a meeting and were told about the company situation and that we were out of a job. Just like that – ‘you’re out’. We were allowed to come back at 10 the next day to come and pick up our things. I was so shocked, and we all were, so we didn’t do anything. So we saw on the news what they’d done up in Northern Ireland and when we went back the next day to get our stuff, we just refused to leave again. It was a spur of the moment thing. Some of the security guards were worried by the number of people and tried to stop people going in, but we said we’re not leaving ’til we get some answers and someone from Ford comes to speak to us. The union is going out to get a meeting, and they’ll tell us what’s going on with Ford and what they’re prepared to offer us and what to do. We need to get the money from Ford even if they close this place down. We had an agreement, so we want Ford to step in.”

“We have three meetings, one on the roof, one inside and one by the steps, as there’s seventy or eighty of us inside, some come and go. It’s informal though, the convenor sends texts around and we chat about what we’re doing. We’ll see what happens, [on Thursday] the bailiffs came round but their notice was all wrong. They’d got it all messed up. The address on the notice to get us out wasn’t for here, it was for a pile of rubble, so we said fine, take it! And it was on behalf of a judge, not from a judge, so it was all wrong. They’ll have to come back. The police haven’t been a problem. We keep an eye out over these steps, and some people are in charge of getting food in and looking after stuff like phone chargers. We’ll see. We’re staying here until Ford gives us an answer. We’re waiting to be told what to do.”

“Three carloads went up to Dagenham. Charlie Kimber [an SWP member] organised it. It was great, they were very well received and it’s good to get the solidarity. Down in Southampton – that’s Transit vans – the union says they won’t handle Visteon stuff.”

The Enfield occupation continues. Send messages of support to 07808 895 724. The workers also need to be supplied with food, drink, sleeping bags, etc. The plant is near to Ponders End station, three stops from Liverpool Street – email uncaptiveminds@gmail.com if you would like to visit the occupation with us.

4 thoughts on “voices from the visteon/ford occupation”