‘Castor kommt. Du auch?’ (Castor is coming. You too?) has been the uniting chant since April 1995, when the first cross country transport of radioactive waste from France has brought the rural farming village Gorleben in the region of Wendland in Lower Saxony in the north-east of Germany to controversial fame. It triggered an overwhelming movement of protest, such as Germany has not seen since the student revolution around Rudi Dutschke in the 1960s. Typically, the corporate newspapers had a field day with pointing out the millions of Deutschmarks the immense police operation to stop the ‘Atomchaoten’ (nuclear rioters) would cost the taxpayer and were quick to blame ‘den schwarzen Block’, the anarchists. But no, far from it, the anti-nuclear protesters taking part were coming from all ways of life: the guy who runs a gardening service, the carpenter, the supermarket cashier, farmers, grandmothers, small town politicians sitting in the constituency of Lüchow-Dannenberg, teachers and pupils. Doctors and punks and indeed, a complete army of vicars from every village and small town around expressed their opposition loudly. 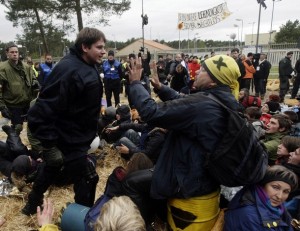 The real ‘Atomchaoten’ were the others, the politicians in high places and the pro-nuclear lobbies, who agreed on a disposal place in an old salt mine that had been proven to be sinking and had ground water getting in and worse, getting out. The ones who sponsor nuclear energy and let power stations run without sufficient security or options for alternative energies. The ones that had already wasted 40 billion in the creation of one-way solutions and a storage site for deadly radioactive waste with the safety standard of a potato barn.  Pro-nuclear lobbyists claim that all scientific findings have concluded that the Gorleben site would be suitable for final disposal purposes. This is blatantly untrue: even as far back as 1979, geological scientist Klaus Duphorn – whose views are pro-nuclear – concluded that the Gorleben site is just not suitable for the disposal of radioactive waste, due to water seepage into the soluble salt environment of the mine.

The scandal around the drowning nuclear waste dumps Asse and Morsleben in Gorleben has made headline news since decades and kept the discussion of the apparently sheer impossibility to solve the problem of nuclear final disposal and a nuclear phase-out any time soon in the public eye. In times of imminent climate change, the German nuclear power lobby tries to act solely on behalf of their own capitalist interests. Not surprising really. In a huge media campaign two years ago they exploited the fears and insecurities of the population about the obvious threat of climate change and rising prices for energy to make nuclear energy an attractive solution again. Nuclear power would save the climate and guarantee cheap energy, a looming renaissance of nuclear power.

The 11th, and last to date, Castor transport protests that took place in November last year were therefore not only about the transport of nuclear waste to the Gorleben disposal site – they also highlighted the still unsolved problem regarding the final disposal of Germany’s, and the world’s, radioactive waste and the lack of other energy solutions. Where there is no verbal communication possible anymore, you will have to look for different words, the language of civil uproar and peaceful resistance by simply sitting and laying on the train tracks. The people’s solidarity with the farmers living in the affected area and the determination to support them in their opposition was incredible, still is, and there was no need for political parties or unions to organise them. The brutality with which the state and the big energy corporations were following their selfish interests showed the normality of a system we didn’t want to be part of.  Resistance against nuclear power will also always mean a fight against the structures of a society that is indifferent to the consequences that the operation of nuclear power plants will inevitably bring.

The answer was direct action to disrupt and delay the transport as much and for as long as possible. The way security forces were massively present around the transport route, the activists had to come up with a variety of disruptive ideas. And the imagination of the protest left the police that were called to the Wendland from all over the country helpless, if only for a while… Taking away parts of the train tracks, undermining the tracks, human chains and blockades, blocking the route with tractor successions, sit-down demonstrations, creating barricades of fire with straw, building pickets and concrete pyramids, anything to keep police away from the tracks to secure an ‘easy ride’.

At the time of the first two Castor transports in ‘95 I was at a boarding school about 20 km from Gorleben. Despite an array of Barbour jackets, deck shoes, wealthy parents and matching BMWs that somehow come with the territory of attending private schools, it was run by a couple who founded the German Green Party along with Petra Kelly and to go and chain yourself to train tracks to stop a nuclear waste transport was very much encouraged. The anti-nuclear protests were a driving force of the green movement in Germany, from which ‘Die Grünen’ evolved. When they first came to power in the Schröder administration of ‘98 they seemed to have achieved their major political goal for which they had fought for 20 years: abandoning nuclear energy in Germany within the next ten years. But sadly it didn’t happen.

The symbol of the anti-nuclear movement around Gorleben is a simple X.  You could find it painted on roads, hidden somewhere in the landscape, and on bright yellow posters and flyers that were put on trees, shop windows and every car in the county announcing ‘Tag X’ and urging people to come and peacefully help to stop the Castor. When the first shipment of Castor casks was sent to the Wendland the campaign had the headline ‘Wir stellen uns quer’ (We shall be in the way), and that was what we tried.

There were, and according to related websites still are, two steady camps in the area that welcomed people for the weekends of action for exchange of ideas and to organize small groups to hide in the surrounding woods and fields ready to wait for any gaps in the police lines to get to the train tracks and cause disruption. The protest and sitting blockades would then go on for as long as it took until riot police had resorted to violence to clear the way and the train got past through to the disposal site under loud protest. From the start the rather chaotically planned, peaceful and colourful protests turned into something else entirely.  I found the high level of violence on part of the police very intimidating and utterly pointless, especially because when there were always a lot of children amongst the protesters.

During the first transport we’d managed to keep up a sitting blockade for several hours, apparently it took over four hours alone to move the Castor two kilometres due to the obstruction. In the end, however, the water cannons proved way too strong for us and after being hit in the face; kicked and being threatened with batons and mass arrests we had to give up and let the transport through. Our shouts and catcalls of discontent and disappointment were deafening.  The second time I never made it down to the route, unfortunately the police caught our group in a field, kept us in a police van for about five hours and after the Castor had managed to pass through, I was escorted to my car. Feeling so helpless, being faced with the whole range of radical measures which the police had been officially allowed to take to stop us getting down to the route, I found very unsettling.  Needless to say, I also felt very annoyed and angry with myself that day for not running faster…

Dorothée Menzner (Die Linke) said last year: “I can’t say that I’m crying many tears about the departure of former chancellor Schröder, but at least with one thing he was right. I quote: ‘Nuclear transports across the republic, that can only be secured through a massive police force, do not fit with my view of a reasonable and forward thinking democracy’”.  But sadly the vigor and enthusiasm of his government declaration speech eleven years ago left him quite quickly. 17.000 heavily armed riot police to keep 16.000 protesters at bay, barbed wire, unmuzzled dogs, civilian movements being restricted, civil rights violated, constitutional protections cast aside and a complete ban on demonstrations around the area are still the reality of a Castor transport today.

A spokesman of the local resistance group ‘Bürgerinitiative Lüchow-Dannenberg’ states that breaches of basic rights are regularly and knowingly committed during the transports: “On the agenda of breaches to enforce the transports against the interests of the population are the basic right to life and physical integrity (Art. 2), the right to freedom of assembly (Art. 8), the right to privacy of correspondence, posts and telecommunication (Art. 10) and the right to property (Art. 14).’”

But the police brutality and the breaches of civil rights have been widely criticised.  And a ruling of Germany’s supreme court earlier this year that gives residents along the waste transport routes the right to litigate against the transports gives hope to keep the protests up.  Also today, at least, Germany has no applications from nuclear companies to build new nuclear power plants, due to the very negative attitude that exists in the country towards nuclear energy, which will hopefully continue.

View all posts by c0mmunard