The PCS civil service union faces yet another massive challenge. 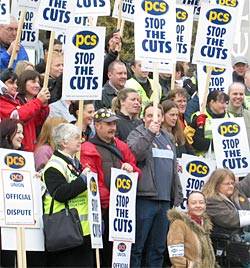 The government have signalled the intention to alter the Civil Service Compensation Scheme  (CSCS) as it is apparently “too generous “. The effect would be dramatic, halving redundancy payments for example.

The union is getting ready for massive consultation exercise with members, No doubt industrial action will be necessary.However there are problems. Having backed down on pay last year (as noted by The Commune ), there is a mistrust and in some areas outright resentment to that tactics of the “left” led NEC. The much vaunted deal which led to the cancelling at the last minute of the November strike has proved worthless, leaving tens of thousands of members having to accept or having imposed derisory pay deals. Currently the second largest group within PCS Revenue and Customs face either having to accept a deal rejected twice by members or its withdrawal. The bosses, heartened by the continual backing down of PCS, are scenting blood.

Aside from the fact that pay has not be addressed, tens of thousands of jobs have gone in the civil service. This has left many members under great stress with LEAN type management practices introduced to cope. Also offices are closing leaving thousands without future. The NEC claim that they will fight if there are compulsory redundancies….but there have been at least 80 and nothing done so far. The proposed changes to the CSCS if implemented will enable the bosses to get rid of thousands nice and cheaply. The response front PCS will be interesting!

All told this is now crunch time for the Left in PCS. Members see that there has been no real victory on pay, jobs , and even the victory on pensions is looking short lived.

Workers in other unions such as CWU and RMT are fighting. It is no use looking to the big Labour affiliates who currently seem more obsessed with expelling activists rather than upset a rabid labour government.

> Draw up a campaign of rolling action , targeted to cause maximum disruption to the government. This will be easy as many departments are imploding, and others such as the Department for Work and Pensions cannot cope due to the extra work being generated by the recession. Billions remain uncollected in Revenue and Customs.

> Link up with other unions and campaigns to draw together all those fighting back, this could give confidence to many others suffering cutbacks to join in.

As for the Left Unity grouping in PCS there is now a real need to reflect on why LU was necessary. Uncomfortably LU is supporting actions and outcomes that are often not dissimilar to the old right wing. Its time for a big change and some decisive and bold thinking. The contact centre dispute in Revenue and Customs shows what happens when serious, imaginative and serious action is proposed.

If this does not happen the union may well be in trouble. Certainly the left may end up split and discredited, which would be a disaster after the years of hard work to gain influence.