A report on the situation in Honduras over three months after the military coup against centre-left president Manuel ‘Mel’ Zelaya: by a member of Socialismo o Barbarie 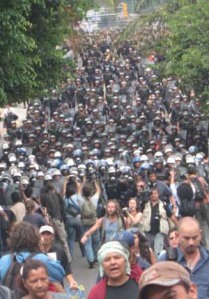 The resistance is at its lowest ebb since the coup. The mobilisations have reduced in size to just a vanguard section: in the case of Tegucigalpa [the capital] marches of thousands of people have been replaced by meetings of a couple of hundred or pickets of twenty people of various organisations (for example, feminists, Radio Globo journalists, etc.)

I believe that this situation is the result of various factors emerging since the Zelayista majority on the leadership of the Frente Nacional de Resistencia Popular put the brakes on the movement in the barrios [poor districts] which had been causing the coup government great difficulties and which had made them uncontrollable.

As always, they have sought to keep the movement restricted to the capital and central areas of Tegucigalpa. These are marches for the consumption of the international media, pressuring the top-level negotiators: they are as much for the US State Department as for the coup government. They are like the marches to the border. At the same time these small marches and actions separate the vanguard from the masses and the barrios and decrease the likelihood of a general strike or a mass uprising.

This policy of the FNRP leadership reflects a backward step in the struggle, aggravated by its coincidence with:

1. Zelaya’s call for dialogue, his meeting with and embrace of the coup government, leading to some resistance but also confusion and despondency: a situation which [post-coup president] Micheletti has successfully taken advantage of with his call for dialogue, whose only objective is to buy him time.

2. The declaration of a state of siege with the suspension of constitutional rights. The state of siege has not been challenged by the mass movement. The situation is well illustrated by the Monday 28th September photo [above], which looks like a police and army demonstration.

3. The closing-down of Radio Globo demonstrating the weakness of organisation in the capital, no longer with any means of communication and calling protests.

4. The evacuation of the Instituto Nacional Agrario with the arrests – and trial for sedition, and jailing – of 41 comrades (all of them supporters, none of them a union leader).

The combination of these factors and the media bombardment on the theme of negotiation and elections have disoriented the FNRP across the country. It ploughs on but with no strategy to defeat the coup. Meanwhile the politics of Zelaya – who does not them anyone over his games and the negotiations taking place on the back of the people’s struggle – has disturbed them. They have said nothing on the elections, and made no criticism of them as yet. They have maintained a curious silence on the idea of an ‘Independent People’s Candidate’. Neither they nor Zelaya are telling us anything…