The strike by migrant workers in Paris demanding regularisation has now spread to over forty workplaces, and as it heads into its fourth week it now involves some 4,200 strikers. The latest headline-catching turn in the dispute has been the occupation of part of the French capital’s Pompidou arts centre by restaurant staff. 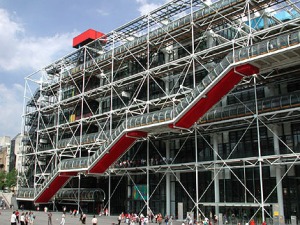 Libération reports that the flash sixth floor restaurant has now been occupied for over a week, with forty people staying day and night “to show that even behind the decor of chic Parisian restaurants, undocumented workers are running things behind the scenes”. Below appears an interview with Seni cleaners about the issues underlying the strike wave in the city.

We, the reps representing the striking workers at Seni, demand the regularisation of all workers without papers, with the greatest possible speed. We are not hear to cause havoc, but to fight for our rights. We have worked without papers and without access to social security for many years… It’s time! We started with 180 strikers last week, and now we are 263 in number.

How do you explain this growth?

The struggle begun with those currently under contract with Seni, but we have among our number comrades laid off after short-term contracts in the past. On our picket line some people are not currently employed by Seni. Some were laid off as long as five years ago. Some among us are on course for regularisation. The police prefectures give no response for six months or more: they obviously block applications, in particular in Val-de-Marne and Seine-Saint-Denis. Seni management claims to have seen the dossiers and have even shown us the documents which are supposed to prove it. However, when comrades turn up at the prefecture they are told that their application was never filed. Management and the police are stringing us along, and we want management to put an end to this. Until that happens, we are staying put: we are determined to win.

The movement is demanding a regularisation bill…

If a bill is passed we hope it will be in our favour, recognising undocumented workers who live and work here and pay their taxes: but without discrimination, even those who have not even worked for one year. We are not on strike just for ourselves, we want papers for all workers, including those working illegally.

What do you expect from the support committees?

We want them to help us resolve the situation, by signing petitions, collecting solidarity funds and coming in large numbers to our demonstrations. Some of us are parents of students, so we are counting on the support of RESF (Education Without Borders Network) which can mobilise other parents and teachers.

Why is regularisation a trade union demand?

Yesterday, with the CGT, we established a Seni workers’ union, including those with and without papers, and elected reps.The central fight is currently the struggle for papers. From that base we want to advance our right to housing, better wages, the right to retirement, respect for our need for free time, the right to sick pay and recognition of work accidents… All things that the bosses refuse to undocumented workers. We want everyone to be able to live with dignity in this land of ‘human rights’.

Sadio Dianka is 41. He came from Mali in 2000 and worked in public works. With one of his cousins’ papers he was employed by the Paris tram construction company Suburbaine, who knew of his immigration status.

“I have been involved since the start of the movement, and so I will be until the end. Since going on strike I am no longer afraid, and I am fighting for my rights and my future. The involvement of the unions and supporters has given us confidence. Even if we were kicked out, we would be determined to occupy somewhere else! The bosses need us. One of them called five employment agencies without being able to find labour to hire. But we, the strikers, refuse to work precariously like we did before. Now, enough, we want regularisation.

“It is important to establish contact with other pickets, as unity makes us stronger. Equally we must discuss with our comrades from the Ministry of Regularisation [a campaign group demanding papers for all] which in its own way is fighting for the same thing, living here with respect and dignity. We must support each other and help each other out.”

Mamadou P. left the Dogon lands [central Mali] to come to France. Like more than 2,000 undocumented workers he has been involved in the occupation of a CPAM [government health insurance] office, on Rue Baudelique, since 17th July.

“I did many jobs in Mali, including being a football coach. My situation worsened and I decided to try my luck in France. But here I have no right to work anything other than arduous jobs which do not match with my aspirations. Currently I am working in a restaurant for a boss who is certainly suspicious about my situation. That helped me decide to join the struggle with an undocumented workers’ collective. At the end of my working day I have classes to work towards my diploma and then, I hope, my baccalaureate. After that I return to the Ministry for the Regularisation of all Undocumented Migrants. It is a long and hard fight and we have to try hard to strike a blow. The support we have is very important. I am in solidarity with the striking workers. We have the same goal, and I hope all the campaigns will join us to help our movement secure a favourable outcome.”