“So lets put a stop to defeatism, and put a stop too to all those sermons about Victorian values. The Labour Movement – the Labour Party and the Trade Unions acting together, came into being, as one of our poets, Idris Davies, said, to end ‘the long Victorian night.’ It was a fight to introduce civilised standards into the world of ruthless, devil-take-the-hindmost individualism.” 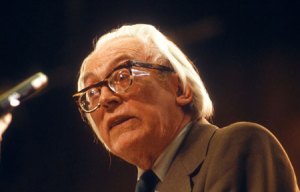 So went a part of Michael Foot’s 1983 Labour manifesto, the so called, “longest suicide note in history” (Gerald Kaufman). And with Michael Foot’s death yesterday, dies too the idea of socialism brought about via parliamentary means. The current ‘Labour’ government would hardly even dream of using terms such as a Labour Movement and are only seen to attack the Trade Unions, ever favouring the concerns of big business; New Labour is just that – New Business.

I wonder, are New Business quoting poets in their manifestos of late? It’s a ripe and hideous testament that during the perfidious press campaign against MF, ‘old bibliophile’ was deemed a term of abuse. Michael Foot had seeped himself in literature throughout his long life: Byron, Shelley, Hazlitt, Swift, Burke being among his particular favourites. It was this book learning that had made him into such a great orator. “The only man I ever knew who could make a curse sound like a caress”, Aneurin Bevan said of him.

Indeed, he would have been a formidable foe if the 1983 battle had been fought on sound grounds. Margaret Thatcher had refused to debate openly with him, knowing full well her intellectual inferiority. But the Murdoch consortium feigned concern with his lack of interest in fashion. Of course, he was sunk even before that campaign began by the SDP-Liberal alliance, the eventual result being SDP-L – 25.4%, Labour – 27.6%, Con – 42.4%. He resigned his leadership of the party after this and was succeeded by Neil Kinnock from where the rot of New Labour was begun.

Michael Foot was from a privileged background, going from prep school to the Quaker public school, Leighton Park (known as the Quaker Eton) and thence unto Oxford where he read philosophy, politics and economics. He became a Labour man as soon as he saw the true conditions of the working class in the thirties whilst working in Liverpool. In 1940 he co-wrote ‘Guilty Men’ under the pseudonym, Cato. The book exposed the then Conservative government for their willingness to appease Nazism. MF, in spite of his CND credentials, being one of its founding members, was not a pacifist. He denounced fascism wherever he saw it, whether in Franco’s Spain or Stalin’s Russia, (making an absolute nonsense of the Sunday Times allegations in 1995 that he was Russia’s agent Boot).

But when in 1933, the multilateral disarmament talks broke down he begun the fight, fought and lost all his life for Britain’s unilateral disarmament. And that was his political history – battles mostly fought and lost. A staunch defender of the Trade Unions, most of his ideas, implemented whilst he was employment secretary, were thrown out by Thatcher, only ACAS and health and safety laws remaining. He would have seen the back of the House of Lords, but sadly never did, and so on with all his socialist ideals.

He was principled throughout – twice turning down government positions over matters of increased defence budgets, opposing his government’s (under Wilson) moves to restrict immigration. Against the invasions of Vietnam and Iraq, more than once turning down a peerage and a knighthood.

I will end as I began with his own words: “we are not here in this world to find elegant solutions, pregnant with initiative, or to serve the ways and modes of profitable progress. No, we are here to provide for all those who are weaker and hungrier, more battered and crippled than ourselves. That is our only certain good and great purpose on earth, and if you ask me about those insoluble economic problems that may arise if the top is deprived of their initiative, I would answer, to hell with them! The top is greedy and mean and will always find a way to take care of themselves. They always do.”