The March issue of our monthly paper The Commune is now available. Click the image below to see the PDF or see individual articles as they are posted online in the list below 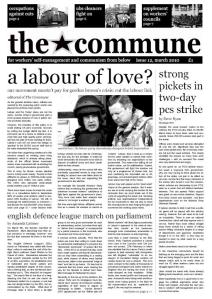 a labour of love? – editorial of The Commune

the lynch mob and our ‘broken society’ – by Adam Ford

dawn of the crisis generation in california – from IndyBay

no surprises as rat boards sinking ship – by Chris Ford

why does unite employ ISS at its HQ? – letter from Kwasi Agyemang-Prempeh

workers’ councils: red mole of the revolution – by Sheila Cohen

migrant workers across italy strike as one – by Andrea Strippoli

the cuts consensus and the general election – by Dave Spencer

should communists stand for parliament? – by Mark Harrison

twenty years after the poll tax – by Allan Armstrong

what is militancy? – by Nathan Coombs

why don’t we side with the humans in avatar? – by Sam Parsa