The well-attended CWU Capital call centre branch meeting on Wednesday evening plumbed the depths of bureaucratic and non-participatory trade unionism. A glorified piss-up, the branch ratified a bewildering array of officers and rules of functioning with no discussion. 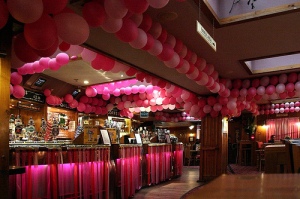 Whereas the attendance at the meeting must have reached nearly 100, the meeting lasted a mere 11 minutes and even that was only thanks to two contributions by SWP members demanding that the election for Membership and Recruitment Officer be preceded by a hustings.

These interventions were very much the political high point of the meeting itself. The chair looked on embarrassed as activists made the obvious argument that the election was undemocratic if the candidates did not explain who they were and what they stood for.

Unfortunately the people running the meeting did not care to explain why they did not want a debate, merely invoking the point that the union’s rules did not force them to have a hustings. A forest of hands – from a crowd standing together – went up in support of this position: two-to-one against any debate. ‘I’ve seen synchronised swimming more sloppily choreographed’…

Thus the branch meeting did not include any reports of branch activities; any discussion of our rules of functioning; or any statements from elected representatives of our organising priorities. The meeting was far from redolent of collective decision-making or purposeful planning ahead. The culture was such that one might imagine the CWU couldn’t organise a piss-up in a brewery… although fortunately on this occasion they had booked out a whole floor of a Wetherspoons pub.

As regards the Membership and Recruitment Officer ballot, the vote was 31-12 for Steve Doherty (apparently the bureaucrats’ choice, although we didn’t get to see or hear him) against the SWP’s Pat Carmody. Moreover, the vote revealed that barely half those in attendance were members and that a large contingent of ‘guests’ had come to ‘observe’.

Indeed, they may have been particularly observant of agenda item six, ‘refreshments’. Despite the extreme brevity with which the chair rattled through items one to five, item six lasted some seven hours, given that we were in a Wetherspoons and the branch was paying for free drinks for everyone all night. As one BT Openreach worker told me, you have to drink a lot to get back your £12 a month.

A (very superficially) glorified piss-up? A waste of time and money? Well, not compared to the CWU giving the Labour Party £1 million last year.

One thought on “cheers to bureaucracy: it’s CWU’s round”