Listening to the debate in the media today you would conclude that there is consensus amongst economists that the key problem of the UK economy is the deficit. And the key question is how to cut it. And the key election issue therefore should be how to cut spending. This is not the case. 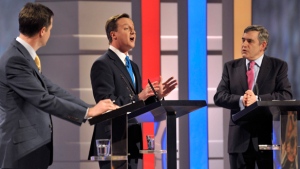 According to the ONS (Office of National Statistics), in the UK, the poorest 20% pay 38.7% of their income in tax, while the wealthiest 20% pay only 34.8% of their income in tax. The confusion regarding this arises because people frequently only think of taxes in terms of income tax, which is progressive, but ignore council tax and indirect taxes such as VAT. However, there is abundant evidence that increased taxes matched with increased social spending makes society more equal, i.e., it increases the wealth of the least wealthy and decreases the wealth of the wealthiest.

With that said, it is interesting to consider the current debate regarding Brown’s proposed increases in National Insurance Contributions (NIC). Brown, while he can be criticised for a lot of things, has a rather strong understanding of economics. He explained the increase in NIC on the basis that it was fairer than an increase in VAT. On this he was technically correct, although an increase in the 50% rate of income tax would be even fairer.

The confusion on the NIC proposals arise with claims from the Tories and the employers that it is a ‘tax on jobs’, a tax on employers to discourage them from employing more. It isn’t. NIC can be thought of as two taxes, one paid by the employee, the other by the employer. But, as with every tax, the issue isn’t really who it is levied on, but who actually pays it, and there is pretty strong evidence that payroll taxes that employers pay, such as the NIC, are partially paid by employers but primarily paid by workers, in the form of lower wages. The tax is not really as ‘fair’ or egalitarian as Brown suggests. It’s a tax on workers. The Tories are either being dishonest or too stupid to understand that this is not a tax on employers but rather a tax on employees. And Labour isn’t admitting what the tax really is.

The debate over NIC is interesting because it shows that the Tories are not serious about cutting the deficit. Rather they simply want to cut public spending and adamantly refuse to levy any tax on business or the wealthy. The Tory line is cut spending and pay for what’s left by taxing the least well off workers.

The unemployment rate is currently 7.8 per cent, 150% of what it was in January 2008. There are nearly two and a half million people actively looking for work in the UK. Despite a 0.1% decrease in unemployment in the last quarter, the number of people unemployed for more than 12 months is still increasing and is the highest it’s been since 1997. The number of economically inactive people of working age (i.e. people who are neither working nor ‘actively looking for work’) increased by 371,000 over the last year to reach 8.16 million in the three months to January 2010.

The figures are even more shocking when you look at young people, where the unemployment rate is 14.8%. The Institute for Public Policy Research estimates that 20% of young white workers are out of work, 31% of young Asian or Asian-British workers and a shocking 48% of young black workers. That means effectively one in every two young black workers in the UK cannot find work!

This is particularly disturbing given that a growing pool of research shows young people are disproportionately affected by periods of unemployment.  It has been found that youth unemployment can have a permanent impact on health status, job satisfaction and wellbeing, and can lead to reduced wages not just in the short term but throughout an individual’s lifetime.

However, despite this, relatively little is being said about unemployment in the UK today. Instead, everything is about the deficit and the need to cut spending regardless of the obvious and significant negative impact that would have on unemployment. Conservative shadow Chancellor George Osborne has argued that “[t]here is no choice between going for growth today and dealing with our debts tomorrow.” As with much recent economic debate, this is idiotic. This statement is essentially that “borrowing is impossible”. Obviously borrowing is possible, Osborne could argue it’s a bad idea but to say that that choice doesn’t exist is idiotic.

Indeed, no less a bastion of socialist radicalism than the International Monetary Fund has argued in a recent study that ‘going for growth today and dealing with our debts tomorrow’ is a good idea. They argue that cutting spending too quickly could damage the economic recovery.

“Unwinding public intervention too early,” the IMF argues, “could jeopardise progress in securing a sustained economic recovery… One of the key lessons from experiences of similar crises is that a premature withdrawal of policy stimulus can be very costly, particularly if the financial system is weak. Thus, in the current context, the potential risks associated with an early withdrawal of policy stimulus seem to outweigh the risks of maintaining it for longer than possibly needed.”

So what is Osborne rambling on about? In his Mais Lecture in February, ‘A New Economic Model’, Osborne laid out his economic theory most clearly, saying that, “[p]erhaps the most significant contribution to our understanding of the origins of the crisis has been made by Professor Ken Rogoff, former Chief Economist at the IMF, and his co-author Carmen Reinhart.

“As Rogoff and Reinhart demonstrate convincingly, all financial crises ultimately have their origins in one thing – rapid and unsustainable increases in debt….. So while private sector debt was the cause of this crisis, public sector debt is likely to be the cause of the next one. As Ken Rogoff himself puts it, “there’s no question that the most significant vulnerability as we emerge from recession is the soaring government debt. It’s very likely that will trigger the next crisis as governments have been stretched so wide.” The latest research suggests that once debt reaches more than about 90% of GDP the risks of a large negative impact on long term growth become highly significant.”

This 90% figure is getting bandied about a lot and also comes from Reinhart and Rogoff’s book. However, in the book this 90% figure plays little to no role. And in a recent Financial Times article Reinhart and Rogoff warn against introducing massive cuts. They write, “[g]iven the likelihood of continued weak consumption growth in the US and Europe, rapid withdrawal of stimulus could easily tilt the economy back into recession.”

Other economists have been even more disparaging of Conservative plans for cuts and their theoretical ‘justification’ for them. Nobel Laureate and former World Bank Chief Economist Joseph Stiglitz referred to Tory plans to cut spending as “incredulous”. He likened their proposals to those of Herbert Hoover, the US President who oversaw the development of the Great Depression, by calling the Tories “Hooverites”.

Stiglitz is even harsher with the notion bandied about by the Tories that Britain is about to turn into Greece and is at risk of default. He says to Osborne, “I say you’re crazy – economically you clearly have the capacity to pay. The debt situation has been worse in other countries at other times. This is all scaremongering, perhaps linked to politics, perhaps rigged to an economic agenda, but it’s out of touch with reality.”

And indeed Stiglitz is right. But not only has the debt situation been worse in other countries, historically it’s been worse in the UK. Indeed, for the entire period of the industrial revolution the UK had public debt above the supposed threshold of 90%. UK public debt went first over 90% in 1746 and did not come down below 90% until 1863. That’s unsustainable debt being sustained for a period of 117 years!

That is not to say that this level of debt can be taken on without costs. Rather it merely shows that the notion that the UK is on the verge of disaster unless the deficit is cut and public debt is taken under control. The UK is not on the verge of disaster. But up and down the length of the country, workers are suffering from unemployment and neither the Tories, Labour nor Lib Dems seem to be all that fussed about it.