The standard media portrayal of a BNP voter is of a poor, unskilled to semi-skilled white worker, who used to vote Labour, is worried about rising crime, unemployment and the rise in immigration. But is this really who votes BNP? Two recent studies suggest otherwise. 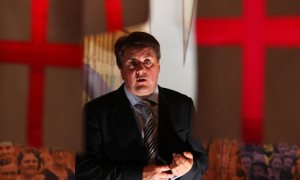 According to the BNP itself, the primary reason for its growing support is that the political elite is out of touch with working class people’s real concerns about immigration. A report by the Institute for Public Policy Research published last month finds little evidence for this. Indeed the report finds that higher immigration lowers the vote for the BNP. Likewise, the higher the number of non-white people in an area, the less likely people were to vote BNP. (The one and only exception to this was in Barking and Dagenham.) Intuitively, we can understand why this is the case. The more interaction people have with migrant groups the less concerned about immigration they are.

Another finding of the study was that crime and unemployment seemed to have little to no effect on support for the BNP, and what little evidence there was suggested that higher crime rates and higher unemployment led to lower BNP votes.

A slightly older study, ‘The BNP: The roots of its appeal’ (2006), by researchers in the University of Essex looked at BNP support in the 2004 European elections. They interviewed people coming out of poling stations and found that ‘it is the lower middle classes [sic], C1s and C2s, who vote for the far right’. After this the next largest BNP voter demographic was the unskilled/manual working class. Very little support came from either the professional and managerial demographics. Most interestingly however, was that very little support came from the poorest demographic.

The same study also found that although the BNP was pulling support from all three parties, but the main voter swing was from the Conservatives and not Labour.

So if most of the simple reasons for BNP support have been dispelled, why are people voting BNP? The IPPR says “socioeconomic and political exclusion are the major factors at work.” Not surprisingly, the IPPR find that where less people think ‘that their area is one where people from different backgrounds get along’ they higher the BNP vote. They also find that areas with lower voter turnout show more BNP support. This finding is also supported by the ‘The BNP: The roots of its appeal’ report.

While some anarchists, such as this author, might occasionally like to think that declining voter turnout suggests that people are abandoning representative democracy and are about to stand up for themselves through direct action and self organisation, this need not be the case. Rather, declining voter turnout means little more than that people feel alienated, separated and unrepresented by mainstream party politics. There is no reason why people’s experience of political exclusion should result in a revolutionary rather than a reactionary response.

Another strong finding of both reports is that the lower the average level of qualifications in an area, the higher the BNP vote. The standard reaction to this might be “ah people vote BNP because they aren’t educated”, and then draw the conclusion that the task of the left should then be to ‘educate’ BNP voters about how bad the BNP is.

The Essex report seems to tend in this direction. However, it is extremely unclear to me how an A level in Maths or a BSc in Engineering could make anyone less racist. The IPPR report gives a much clearer explanation of how and why people’s level of qualifications matter. They point out that “people with higher qualifications have more options in the increasingly open, flexible and knowledge-based economy that we live in. While finding employment per se may not be central (as indicated by the finding that employment levels do not affect votes for the BNP), the quality of work people can access may be critical. Where people have lower levels of qualifications they seem increasingly likely to struggle to find good quality work that pays a living wage, which could make them feel excluded and vulnerable.”

In sum the IPPR finds that “the evidence points to political and socio-economic exclusion as drivers of BNP support. In particular, areas with low average levels of qualifications (which can mean people struggle in today’s flexible, knowledge-based economy), low levels of social cohesion, and low levels of voter turnout (indicating political disenchantment) are the ones that show more BNP support.”

One thought on “who votes for the BNP?”