Here’s an attempt to give a brief overview of Wednesday’s event at Conway Hall: Can’t pay, Won’t pay: Solidarity with Greece organised by Counterfire: an SWP offshoot, with Lindsey German, John Rees and Andrew Burgin at the helm. 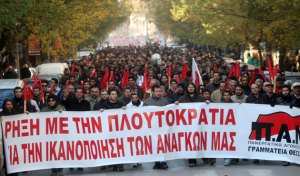 We can only hope that left unity over the coming cuts, expressed at the meeting will be upheld considering various SWPist cock-ups of the past. But this was actually a very positive meeting and there were some great, rousing speeches.

Andrew Burgin kicked off, relating how actions were taking place all over Europe as well as in Greece, a general strike in Turkey, daily demonstrations in Romania, actions in Italy and Germany too.

Then Penny White from BASSA (air crew union) took the floor and told how they had “been bending over backwards” to come to a settlement, offering to save BA £51 million and accepting that further changes were going to be made to their conditions. It was absolutely clear to her that the continuing conflict was about smashing the unions and not about coming to a settlement at all. Willie Walsh was hired to bust the unions and the staff travel issue has become a matter of Walsh’s ego over common sense.

Many staff have been hired from abroad and staff travel is actually required for getting them to work. They are very poorly paid – £11,000 take home a year. They would naturally prefer not to strike, not having savings on such wage constraints makes things very difficult indeed – strike pay is just £30 a day. Most alarming was Penny’s account of the bullying tactics used by management – people suspended for any verbal criticism, one woman overheard saying to a colleague, “I hope you’re not going to train as cabin crew” was suspended for this. And there’s been some other big brother actions. Facebook comments have also been monitored and suspensions doled out for any vaguely critical comments made.

Greek activists, Aris Vasilopolous and Christos Giovanopolous from the coalition of radical left, Syriza spoke of the government and the media trying to divide the workers but standing together, “we are their crisis”. Also mentioned was Argentina where the the people are making their own agenda – the left taking lead from them. Actions held have included the occupation of a Greek TV station by unemployed teachers, so that they could broadcast themselves what was happening. They said that members of the social democrat party are lying low for when they arrive any where the people shout, “Thieves”.

Paul Mackney, former general secretary of NATFHE also attacked the media for their attempts to smear Greek workers, making them out as feckless and lazy etc: the truth being that the Greeks work the longest hours in Europe (along with UK). Statistically they have very little absenteeism compared with other countries, Germany’s being much higher for instance. He said it was not for nothing that the IMF had come to be known as International MotherFuckers and quoted Nixon on aid, “aid is there to help ourselves”. He also gave an historical overview of previous Greek resistance from 1923 -1967.

Clare Solomon, President-elect for the University of London Union spoke next, along with a PHD philosophy student at Middlesex. This student was rightly furious at the closure of her department and has been directly politicised through this, saying that she will take the fight back home with her (to America). One of the reasons cited for the closure was that the department didn’t have a large enough student intake, but, ahem, management had previously put caps on the numbers. Management have even used outrageous lies in their attacks on protesting staff and students saying that the bones of security men had been broken. Clare Solomon had got 22,000 to sign a petition on Facebook but lo! they then closed her account. That’s twice Facebook came up here in unseemly colours – a great facility to gather activists though it can be … We need our own facility, if only we could succeed at that. Probably it would be sued out of existence.

Green MP Caroline Lucas spoke of the falsity of the language used by our shiny new government: we all know what the mantra “freedom, fairness and responsibility” really means. And the mantra, “protecting front line services” – front line services are not a separate entity, she rightly said. What is needed is progressive taxation. Michael Bradley from The Right To Work Campaign spoke (really volubly) on public sector cuts, privatisation of the post office, the cap on EU migrants and that we had lessons to learn from Greece on solidarity.

Last to speak, (you’d have thought they’d put him first due to age and frailty) was Tony Benn, who spoke of what globalisation had really meant for us, i.e. the transference of power to the financial sector. He said that Thatcher had understood very well the labour movement and that is why she went out to crush it and attacked Liverpool Council etc and he stressed the importance of solidarity with an old yarn told him by an American trade unionist ending, “Tie your ropes together”. Very sweetly he got a standing ovation (We nearly cried)…

One thought on “greece solidarity meeting in london”