… on the changing composition of the working class and the implications for class struggle, by Sheila Cohen

The statistics will come later, but in advance of the talk I have been asked to give at The Commune’s summer school, I would like to look at the broader political sweep of how changes in class structure and composition interact – or don’t – with issues of consciousness and resistance. 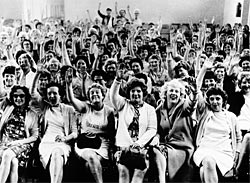 Mostly the story is one of almost complete unpredictability – a “trend” which should be seen as being to the advantage of those who seek socialist transformation. While the left is often preoccupied with attempting to map out the precise nature of the “epoch” and its relation to possible action on the part of the working class, history teaches us – or should – that such predictions are often worthless. Here, I would like to examine a selection of them.

In the 1870s, an era when Irish workers were the ‘EU migrants’ and were if anything more vilified, a self-described ‘Old Chartist’ wrote, “In our old Chartist times, Lancashire men and women were in rags by the thousands; and many of them often lacked food. But their intelligence was demonstrated wherever you went. You would see them in groups discussing the great doctrine of political justice.

“Now you will see no such groups in Lancashire. But you will hear well-dressed working men talking, as they walk with their hands in their pockets, of ‘Co-ops’ and their shares in them or in building societies”.

The remarks of this (understandably) Grumpy Old Man of over 100 years ago anticipate Lenin’s later analysis of a “labour aristocracy” within the working class consisting mostly of skilled craft workers whose relative privilege removed them from the turbulence and the semi-anarchic revolt which surged up with the New Unionism of the late 1880s. However, even beyond that upsurge, the assumption of an unchanging layer of privilege within the working class was subverted by the end of the 19th century through the increasing encroachment of mechanisation and mass production into the working lives of this layer.

From the semi-“bourgeois” union members and leaders lamented by Marx and Engels (though they refrained from predictions as to their future class consciousness), engineering workers rapidly became, during the upheavals of the pre-war Great Unrest and First World War workers’ committee movements, a quasi-revolutionary vanguard. Even before these dramatic events, engineering workers had begun to form the first effective and lasting forms of workplace organisation, based on the shop steward system of direct representation.

As James Hinton’s book on the First World War shop stewards’ movement notes, this at times quasi-Soviet form of organisation, with its accompanying levels of militancy and class independence, was rooted not only in these workers’ relative deprivation but also in their craft traditions of self-education and reverence for the value of labour. In this way, a consciousness once rooted in comparative privilege is seen as transmuted by a complex process of employer aggression, technological change and a lasting culture of craft pride into the dialectical opposite of an “aristocracy of labour”.

Further examples of startling change from the assumed apathy, weakness and/or “embourgeoisement” of new sections of the working class follow as we advance into the inter-war period. With the growth of mass production industries such as car assembly and, even then, the decline of traditional bastions of “community”-based industries like shipbuilding, a doleful future was predicted for union organisation. Yet the assumption that trade unionism itself would fall at the hurdle of sophisticated “new” industries was once again subverted by the ever-resurgent logic of worker action against intolerable exploitation and employer aggression. In one account of union organisation at Pressed Steel, an Oxford factory supplying the car industry, a participating activist writes of a “spontaneous explosion” of worker resistance and organisation in 1934:

“A day’s work in the huge press shop was a test of endurance…Accident rates were high and no shop stewards existed to take up these matters…In short the workers were an unorganised mob…an apparently docile work force which seemed resigned to…’free enterprise’…Then to the astonishment of the Pressed Steel management, who thought everything was going admirably, the spontaneous explosion of 1934 happened…180 workers in the press shop walked out. Among [them] were a number of women who played a militant and loyal part in the struggle. At first they had no clearly defined demands…The strike was a spontaneous expression of revolt against the ruthless pursuit of profit…

“After some confused discussion among the unorganised strikers someone proposed that a provisional strike committee be elected. Thus, the traditional form of strike organisation was created before any formal union organisation existed. This was a remarkable illustration that, in essence, the union in no more than the determination of the workers to act in union for the betterment of their conditions of labour” (emphasis added).

Perhaps predictably, the workers’ action was not supported by the local branch of the AEU, which had a tiny number of skilled workers in the factory; yet, as the writer concludes, the strike committee flourished and “play[ed] an important role in the revival of a working class fighting spirit” dampened by the 1926 betrayal and Labour’s participation in the coalition government of 1931.

This account has been reproduced in some detail because it illustrates so clearly the involvement, strength and courage of many supposedly “unorganisable” workers, including of course women. A similar story of the unionisation of Ford against what was even for the times an exceptionally anti-union management would also demonstrate the key role of Irish workers in that equally brave and apparently impossible attempt.

Perhaps one of the most priceless examples of a subverted prediction of worker docility based on the conception of “affluence” in the mid 1960s is that of Goldthorpe and Lockwood’s extensive study of car workers at Vauxhall’s Luton plant – the so-called “Affluent Worker” series. Having predicted that these supposedly embourgeoisified workers, with their cars and private houses, would never exhibit the militancy and solidarity of their traditionally industrial forebears, the worthy sociologists were confronted with a massive strike at the plant – on more or less the date of publication. As on contemporary account relates:

“Rarely can a sociological study…have been so cruelly put to the test. Scarcely one month after the publication of Goldthorpe’s findings… the Luton car workers broke into open rebellion. The workers in whom Goldthorpe had been able to detect ‘little tendency to interpret employer-worker relations in fundamentally “oppositional terms”’ were responsible for an outbreak reported on p 1 of The Times:

‘Near riot conditions developed today at the Luton factory of Vauxhall motors…Two thousand workers streamed out of the factory gates and tried to storm the main offices…The scenes outside [saw] men singing ‘The Red Flag’…Across the road hundreds of men linked arms and prevented a heavy Bedford truck from entering the factory..’.”(in Blackburn and Cockburn The incompatibles, Penguin 1967, pp48-9).

As Blackburn correctly points out, the sociologists’ analysis failed to take account of the continuing, daily impact of exploitation in terms of constant pressures on labour costs; pressures which meant, in this example, putting workers on a four day week with 20% less pay and reducing cleaning in the paint shop from weekly to fortnightly, resulting in atrocious conditions. In terms of these incessant and irreducible pressure of capital’s requirements on workers’ lives, it can never be predicted, as Goldthorpe et al were naive enough to do, that workers will not resist.

The carworkers of the post-war period were seen by such commentators as almost a new species of worker, one “instrumental” and “calculative” enough to pragmatically accept the rule of capital. As this example shows, such can never be the case. Yet, despite the ensuing and at times quasi-revolutionary upheavals of the later 1960s and 1970s, it seems that the more “sophisticated” within the Marxist canon are at all times eager to announce the premature death of the proletariat.

Moving on to the 1980s, immediately after the 1978-9 “Winter of Discontent” had swept up large sections of workers in joint strike action, we find Stuart Hall satirising the supposedly Marxist image of the worker as a muscular white man with tools hanging from his belt. Given that his largely Stalinist/Eurocommunist counterparts had already contributed to historian Eric Hobsbawm’s 1979-80 collection, The Forward March of Labour Halted, it seems that the cultural theorist should have had no such qualms. In the same year, Andre Gorz’s Farewell to the Working Class completed a triumvirate of sophisticated “Marxist” scepticism as to the enduring nature of a class defined by its production of surplus value for capital.

In an era in which western countries have been fundamentally affected by the victory of neoliberalism and the advance of globalisation, the character of the working class has of course changed massively. Migration, particularly over the last two decades, has increased exponentially due to increased poverty and violence in the always politically oppressed and now abysmally exploited countries of the global south.

Yet, whatever the preponderance of ethnic minorities and women within today’s working class – women now make up half of all trade union members, a historic first – it remains demonstrably a working class, as the grotesque super-exploitation of its more “diverse” elements only confirms. Last year’s wildcat strikes among engineering construction workers were notable not only for their lively subversion of the anti-union laws, which remained entirely unchallenged by the government, but also for their support for, and at times involvement by, migrant workers themselves. Like the sewing machinists at Ford whose 1968 strike has been so widely misunderstood as a strike “for equal pay” when it was in fact a grading dispute, these workers were on strike not for some political or nationalistic principle but simply, like workers everywhere, against moves to enhance still further their exploitation by capital.