Steve Ryan reports on the ‘Community organising and tenants’ struggles’ session at our recent summer school.

This workshop was introduced with descriptions from Isabel Parrott (London Coalition against Poverty) and Camille Barbagallo (Friends of Hackney Nurseries ) and a member of the unemployed workers union. 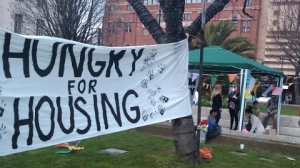 Each illustrated their experiences of community and tenant organising, outlining both the positive and negative sides. It was interesting to hear their views on how they saw the campaigns as political and the experience of interacting with interested parties , especially where sometimes their demands were counterpoised to those parties (Unemployed Workers’ Unions and PCS members working in the Department for Work and Pensions, for example).

The debate was then extended to the floor.

Many speakers considered that community organising was to be vital in fighting the cuts, This meant though building broad based horizontal alliances. It should include those fighting back on housing, service cuts , job cuts for example. The poll tax campaign was exemplified as was some examples in London where the experience was that the campaigns had been too broad based leading o splits and tensions.

Good examples of success and direct action were given, including the Lewisham schools occupation. This showed that the action had to be explanative and political in that many parents were at first unconvinced as their experience of the school was negative, However the aim i.e. a good local school was put in context and gained support,

It was felt strongly that the movement should be designed to grow into all communities linking up federally. Some debate was shad on how to bring Trade unions on board, either through local branches or Trade councils. The National Shop Stewards’ Network was also mentioned. Certainly many unions insularity needed challenging.

The final debate centred on how to win. Consensus was:

– Face up to the challenges forced on us, be prepared, seek quick wins to build confidence

– Don’t be afraid to put political arguments, Don’t hector, but not putting the campaigns in a political context can dilute the aims, lead to NIMBYism etc. If you are an Anarchist , say so.

– Alliances must be active, collective, empowering throughout and horizontal.

– No to austerity, but develop a vision of a new society that flavours the fight back.