We are hosting an assembly on Saturday 11th September, debating the effects of the crisis, the existing resistance and the questions it raises regarding how we organise. 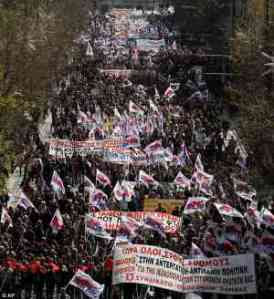 All welcome. We will be soliciting and publishing local and industry-specific reports in the lead-up to the event, see here for the questionnaire. More details on each workshop and timings to follow. The event is from 10am on Saturday 11th September at LARC, 62 Fieldgate Street, London E1 (Aldgate East tube).

The global crisis has lost its bubble form: the announcement of austerity measures, the first waves of mass struggle in Greece and the calls for a general strike in Spain have revealed its antagonistic class core. These mass protests are an expression of wider social unrest, but so far the protests remain on the level of ‘victimhood of cuts’ and ‘institutional mobilisations’.

As working class revolutionaries we want to discover and support the new forms of antagonistic self-organisation, direct appropriation and communist practice within these mobilisations – and their repercussions and impulses within workplaces and working-class living areas.

Only if based on daily working-class reality and self-activity can the unrest can go beyond a delegated expression of discontent and become a search for a new society.

There is no lack of lefty conferences, most of them focussing on interpretations of the crisis or proposing new campaigns. We want to focus this conference on the debate of social experience and political practice in times of crisis: how does the crisis impact on our social reality, e.g. at work, in working-class life, in the political scene? how does it change and challenge our political efforts? We plan to run the conference along four main threads.

The first thread evolves around a common reflection of the current stage of crisis and class movements. We will try to go beyond a superficial celebration of ‘general strikes’ and ‘mass demonstrations’, but try to understand the tendencies of proletarian self-activity within. From PIIGS (Portugal, Ireland, Italy, Greece, Spain) to global wildcats.

The second thread will depend largely on the preparation we all do. We will ask people to write up and present short reports about the local impact of the crisis in their respective towns, about struggles which emerge in response and about how the left reacts to these new conditions – hopefully with reports about new initiatives and social experiences.

– ‘The current struggle against job cuts and factory closures’

– ‘The impact of the crisis on housing and public services’

– ‘Is the university a factory?’

– ‘Effects of the crisis on the unemployed and the benefits regime’

Revolutionary activity has to be reflection in practical terms, analysis in action. We want to discuss about the role of, e.g. solidarity groups during work-place struggles (Vestas, Visteon etc.), about the importance and from of independent publications (The Commune, The Catalyst, Libcom etc.).

We want to debate how the crisis will change and challenge our ‘social issue’-activities, e.g. around housing, benefit advice, squatting. So far work ‘with’ migrant workers, tenants, claimants, neighbourhood inhabitants, co-workers etc. have sat side-by-side – we want to try to debate our experiences as part of class totality in today’s wider social context.

– ‘How to form workplace collectives’

– ‘How to support ongoing struggles: strikers, migrants and tenants’

– ‘Means of intervention and generalisation: the role of publications, an online presence, workplace bulletins and local papers’

– ‘How to do interviews and reports’

– Solidarity networks: an assessment of the current state and role of the ‘really-existing rank-and-file’ (shop-stewards, tenants’ associations etc.)?

This could happen e.g. by collecting regular updates and reports about the local crisis and struggle – for general circulation; of detailed ‘work-place interviews’ with people in our political scene; or a committee engaged in putting together a basic pamphlet around the question of ‘how to struggle against job cuts’, which could be adapted for particular local cases.

Email uncaptiveminds@gmail.com for more info. We will be holding a planning meeting on Saturday 21st August, get in touch for details.