The next of our series of London meetings on communist organisation and class struggle will see discussion of the 1960s-70s Italian group Potere Operaio. From 7pm on Monday 16th August at the Artillery Arms, 102 Bunhill Row, near Old Street: all welcome. 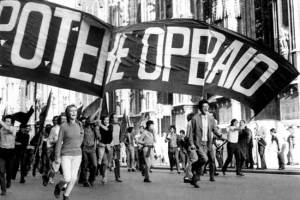 The beginnings of Potere Operaio (Workers’ Power) are situated in the independent workers’ publications and workplace-groups in the late 1960s, mainly in the chemical industrial zone of Porto Marghera.

During various cycles of struggles these collectives got in touch with radical student groups. In 1969 various local groups formed the national organisation and publication Potere Operaio – involving at its high point around 10,000 comrades. The workers’ collectives had to develop their activities along many front-lines: their militants were expelled from the main unions and later on victmised by the company management – they had to find new forms of organising within the factories; the state attack and recession forced them to extend their activities into the proletarian living areas, organising rent strikes and occupations; internal differences within Potere Operaio forced them to reconsider the relation between ‘internal’ (workers in the plants) and ‘external’ (supporting, mainly student comrades).

By 1973 the combination of state repression and recession propelled one wing of Potere Operaio towards a focus on the ‘social worker’: in their opinion the ‘mass workers’ of the big industries were defeated, a new class subject was about to emerge from the dispersed’ social worker’: unemployed, temp workers, intellectual workers. Potere Operaio dissolved.

Many workers’ collectives continued their activities and publications as part of the ‘Organised Autonomy’. Tendencies within the ‘social worker’-wing of Potere Operaio started to organise the ‘attack on the heart of the state’ and transformed into the many armed groups which emerged after the mid-1970s – and which were dispersed during the wave of mass repression post-1977.

The history of Potere Operaio allows us to debate many current questions: self-organisation and workers’ power in the factory and wider terrain; central organisation or coordination of autonomous groups; the relation between workplace groups and external supporters; and communist practice in times of recession and state repression.