With the US empire in terminal decline, the Chinese economy has become essential to the globally integrated capitalist economy. China is now the world’s second largest economy, having officially overtaken its neighbour Japan, with a gross domestic product of over a trillion US dollars in the second quarter of 2010. It has long enjoyed gargantuan economic growth, and even weathered the storm of the global economic crisis up to this point. 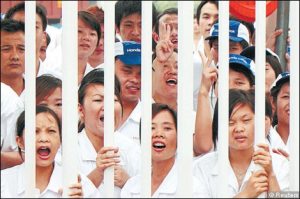 But its status as “sweatshop of the world” now seems extremely vulnerable to both internal and external shocks, and a period of huge social upheaval is on the horizon.

China is currently a few decades into its ‘industrial revolution’, which is similar to those undergone by European states a couple of centuries ago. However, there are a couple of important differences. Firstly, the nation is of course playing host to far more technologically advanced production than the Britain of the 1800s. Secondly, the sheer scale of China as a land mass, and the size of the new Chinese proletariat – estimated to be around 400 million and steadily growing – means that it dwarfs that of any other country. International capital now relies on Chinese workers to manufacture a large percentage of its electronics, cars, and clothing at super-exploitative pay rates.

But this summer there have been encouraging signs that this enormous proletariat is starting to feel its objective strength. In June, a wave of suicides at the Foxconn plant at Shenzhen provoked riots amongst workers, who stopped making iPhones for Apple in miserable conditions, and started chanting “capitalists kill people”, while brandishing photos of the company’s CEO. The company responded by announcing wage rises and improved conditions, though these soon proved to be illusory, and the China Times reported that many workers are now even worse off than before, thanks to changes in the pay structure.

Workers at the Denso car parts factory in southern China seem to have enjoyed more success, brought about by their two day strike over the quality of breakfasts. But perhaps the pivotal standoff of the upsurge was at the Honda Lock plant in Zhongshan, which followed hard on the heels of another victorious Honda strike in Foshuan. While the exact numbers are unclear – they are quite possibly being suppressed by authorities – Honda Lock workers seem to have won a raise of at least 100 yuan, which is around one tenth of their previous wage.

Zhongshan workers faced down management threats and riot police on their way to the victory. But perhaps more interesting than this was the structure of their ad hoc organization. Feeling unrepresented by the All-China Federation of Trade Unions (ACFTU) – which openly acts as an arm of the Communist Party dictatorship – they took collective decisions and elected recallable delegates to set out their demands. So in Western terms, this summer’s Chinese strikes have very definitely been ‘wildcats’ – taken independently of the trade union bureaucracy, which has been identified as a class enemy. “The official union leaders are useless and support management”, as one Foshuan striker told the Financial Times.

A China Newsweek profile of the man identified as the Foshuan strike ‘leader’ paints a portrait that could easily apply to tens of millions of young Chinese workers. Aged just twenty-four, Tan Ziqing left his family’s small farm six years ago, and earns takes home 1,300 yuan a month (about £120). Apart from his living expenses, he sends the bulk of his wages back to his family in Hunan province. “Living almost like a monk”, his only entertainment was online chat. More educated than many, Tan researched previous working class struggles, such as the abortive Chinese revolution of the 1920s. He decided that independent working class action was required at the Honda factory.

Tan initiated the strike with a co-worker on 17th May, and the news spread quickly, via text messages. Having decided that a management concession of 55 yuan per month was not enough, the workers resumed their strike on the 23rd. They rallied on the factory’s basketball court and sang the Internationale.

Despite the Communist Party’s attempts to censor the internet, the strikes generated a lot of chat on various online forums. The mainly young workers at factories owned by Honda and Foxconn are part of the peak internet-using demographic in China, so many young people would have sympathized with their plight. Commenting on the Foxconn suicides, one worker claimed that that people like them faced only three possibilities: “revolution, suicide, or dragging on”.

There is also much condemnation of the official “yellow unions” whose bureaucrats enjoy “mansions, US dollars, fine wine and beautiful women”, while young workers “labour endlessly like robots in a bird cage for a minimum wage”. A blogger urged workers to: “Rise up, those who do not want to be slaves… the rights of the workers all over the world were won by workers’ strikes, bloodsheds and sacrifices! Not granted from the conscience of the capitalists.”

Even though these strikes have been relatively isolated, fears are now being expressed in financial circles that they may just mark the beginning. Indeed, Bloomberg’s columnist William Pesek made the slightly tongue in cheek remark that “If these factory strikes continue, China may have to go communist.” He then posed the vital question: “… will workers demand a true communism, not just one that abhors Google?”

From our perspective, this is all very encouraging, but what does it say about the possibilities of reinvigorated rank-and-file struggle closer to home? Of course, there are obvious differences to the class struggle in the West, but there are also important similarities. Perhaps the most interesting comparison to be made is in the respective compositions of the official trade unions.

The relationship between the Chinese “yellow unions” and the company bosses could hardly be more blatant. For example, the Foxconn ACFTU president, Chen Peng, is also a senior manager of the company! But when Western union leaders actively seek to disorientate workers and strangle their struggles in the name of ‘social partnership’, their class position is almost the same relative to the workforce.

To give a Western comparison, Obama has given the United Auto Workers union a stake in General Motors and Chrysler, the leadership literally does have a seat at corporate board meetings, and directly profits from increased exploitation. As an illustration of this, the UAW bureaucrats are currently trying to force through wage cuts of almost 50% at an Indianapolis stamping plant.

The nascent Chinese uprising illustrates the truth in Sheila Cohen’s March article in The Commune. In ‘Workers’ Councils: the Red Mole of Revolution’, she asked why workers’ councils spring up ‘spontaneously’ in very different geographic and historic cases. “The answer is simple”, she remarked, “because the form is simple; the form is constructed from the requirements of the situation, not plucked from thin air.”

Workers in Chinese sweatshops have now formed workers’ councils, just as countless workers have over the last 150 years. When the avenues for advancement through top-down representation have been exhausted, bottom-up, collective decision-making and delegation is the only alternative that fits.

The Chinese economy is under increasing strain. In the wake of the global crash two years ago, the Communist Party government flooded the market with a more than a trillion dollars of loans. But that money has now run out, and with less demand coming from the recession and cutbacks hit West, Chinese manufacture for export is about to crash.

It seems likely that a tidal wave of resistance will result, making this summer’s revolts look like a trickle. The repercussions for the global economy would be unprecedented, and the idea of workers’ councils could well spread beyond China. To paraphrase the old Chinese proverb, we may live in interesting times.

2 thoughts on “a spectre of communism haunts china’s rulers…”