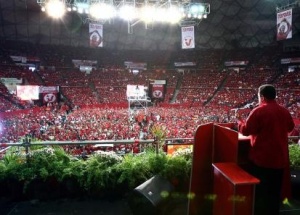 However, today Chávez is presiding over a sharp fall in working-class living standards thanks to the economic crisis and diminishing oil revenue. Claudio Testa reports.

In advance of the elections Socialismo o Barbarie’s Venezuelan correspondent predicted that:

“Hugo Chávez’s supporters will maintain a majority in the assembly thanks to the distribution of constituencies, but will not secure more votes than the opposition… The game of polarisation, encouraged by the government as well as the bourgeoisie and US imperialism – which has made a thousand interventions in the campaign – divides Chávez from the right wing opposition”

This vote is the result of several contradictory tensions. On one hand, the disaster of economic and social crisis which Chavismo has been unable to resolve, leading to a fall in the real wage, soaring unemployment and underemployment, and social breakdown, particularly in the large cities like Caracas. To this picture we must add the scandalous privilege and corruption of the ruling bureaucrats, who falsely label themselves “socialists”. This has led to a loss of popular support, particularly within the workers’ movement.

However, on the other hand, as our correspondent emphasised “in spite of the staleness of Chavismo, this does not mean that people automatically turn to vote for the right. The opposition is not a credible alternative. Workers remember how life was under these parties.

“The contradictions between the right-wing parties are also too obvious, in spite of their electoral ‘unity’. Moreover it is hardly difficult to understand what their real interests are, in spite of their demagogic campaign [major themes were tackling unemployment and crime in working-class areas]”. For many Chávez is still the “least-worst” option.

Together with these two aspects of the situation – the staleness of Chavismo but also the masses’ lack of trust in the opposition – we must add the electoral weakness of independent alternatives to the left of Chávez. They have some influence among significant layers of the most advanced workers, but they cannot realise this in the electoral terrain – always unfavourable to independent tendencies – given the deceitful game of polarisation between Chávez’s state apparatus and the right-wing opposition.

This being so, the results will not resolve any of the serious (and ever-worsening) problems facing the Venezuelan working class. With either Chávez or the right-wing opposition, the high cost of living, lay-offs and social breakdown will continue their advance.

Neither Chávez and the PSUV, nor the gangsters and their MUD will solve anything. The only way forward is the unity and strengthening of the initiatives of the working class and the masses, independent of Chávez and the right-wing opposition.