Shocking as it may be, the Tea Party movement has been a great success. This ‘grass roots’ conservative activism is not a new phenomenon and it would be interesting to look at its recent history. 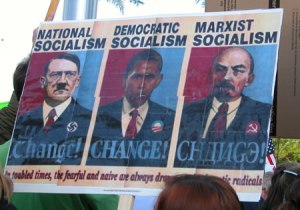 Thomas Frank’s 2003, What’s the Matter with Kansas? proves a useful tool in that regard. Frank himself, grew up in Kansas and was a deeply conservative adolescent who hero-worshipped Ronald Reagan. He learnt from older men an anger that was “endless, implacable, spectacular”.

This was a middle class neighbourhood, the men in question, self-made, comfortably off, yet their indignation knew no bounds and could be directed towards even benign interventions: “water fluoridation! How dare they”.

Frank thinks that these figures from his 70’s childhood never recovered from the 60’s, their favourite politicians, the right wing press, keeping them at boiling point, bemoaning crazy Women’s libbers, obscene art, lack of respect. Frank took it for granted that salt of the earth, blue-collar types would share this outlook and considered he was proved right as he pondered the legend, “Russia Iran Disco Suck” spray-painted in a poor neighbourhood of Kansas City: “The logic was flawless. As sucked disco, so sucked communism. So sucked Iran. Even more inspiring was the unspoken corollary: as rocked Van Halen, so rocked Ronald Reagan.”

Frank learnt the truth about class privilege when he reached college. Locked out of the fraternities, the grooming grounds of the elite to positions of power, he moved firmly to the left, realising he had been duped. Thus his mission to root out explanations and not just on behalf of his own middle class origins.

Why are working class Americans voting Republican against their own interests? And why are they moving the Republican Party even further to the right? In Kansas, Frank traces this back to as late as the 1990’s. The angry self-made men of the 70’s were few in number back then, if particularly vocal and determined to be noticed. He was a particularly uncool kid, by his own admission, in following their lead. And Kansas did not have a long history of conservatism, though it did have a history of left radicalism.

In the late nineteenth century was born the People’s Party, also known as the Populists. This was a crusade on behalf of poor white cotton and wheat farmers in response to the dropping prices of those crops. They campaigned against the banks, the railroads and all the elite and had their biggest success in Kansas when William Peffer became the party’s first US Senator. Kansas was the first state to propose women’s suffrage in 1867 and achieved that aim by 1912. They even reformed abortion laws ahead of other states and prior to the Roe versus Wade decision of 1973. Strange then, that it was that same issue, that spurred the first great leaps to the right. 1991 saw the rise of the deeply conservative pro-life campaign, ‘Operation Rescue’. Religious fervour mark these origins and pushed forward to new ground, declaring against Darwinian theory being taught in schools.  But Republican politicians, though declaring sympathy with these causes never realise laws in their favour. The reasons become all too clear. When the working class are up in arms for these causes they are sidetracked and not tackling what is really standing in their way. They are not thinking about economic issues.

Republican politicians feign apoplectic fits of rage supposedly on behalf of the people over other matters too. Liberalism becomes the dirty word describing all that’s ill with the world. Great sneakiness manifests in this regard. Take, for instance, anti-intellectualism, decrying against these privileged college boys, with their suspect cosmopolitan tastes, their foreign cheeses, their fine wines, their book learning. These snobby types are ascribed to the Democrats who look down on the rest of us mere mortals. The oil rich, Yale educated, George W Bush pushes forward a good ol’ country boy image.

This ludicrous propaganda is pushed forth so hard that it’s winning. There are so many prominent figures proselytising for its cause, there’s barely room for failure. Entire television and radio stations, TV evangelists, right wing DJ stars, the press – all hard at work manufacturing hard luck stories for the elite of America, crying out for even bigger gains for corporate success: “ “We are here”, they scream, “to cut your taxes”” and it would come as no surprise to Thomas Frank that they have even learnt to scream, “Public health care plans! How dare they”.

But are campaigns such as the Tea Party movement really grassroots initiatives? Apparently the Tea Party (standing for Taxed Enough Already) was originally formed of disgruntled citizens but billionaire concerns, seeing the potential for their own iniquitous gain “catalyse and direct real mobilisations”. George Monbiot describes ‘Astroturf’ campaigns (The Guardian, 25th October), fake grassroots movements. The Koch Brothers of Koch industries, the largest private company in America, involved in oil, coal, chemical industries and logging with 100 billion a year turnover, soon realised the potential in this mobilisation and began hosting Tea Party events in various states across America, oh, yes please less taxes and lets be less retrained by regulations too. Down with environmental agencies, they cry, and the people cry along with them, “Down with our health and Safety”. False consciousness rules!

So, can we make a comparison with the Tea Party activists and our own stubborn working class Tory voters, some sources saying that they make up a third of the Tory vote and have done since 1945? There are clearly some elements missing from the agenda of our own deluded turncoats as contrasted with America’s, most noticeably, Jesus Christ; we’d be really shocked if he put in an appearance.  What of that last refuge of the scoundrel, patriotism? The Tea Party, certainly – swathed in stars and stripes, dressed as uncle Sam, eternally on about the forefathers and the constitution.

I would guess the two sets would converge here – a belief in some mystical, golden past, when everything was just dandy in the land of the free and good old Blighty, though their imaginations are fed from different sources, ours born more from institutions, deference to the monarchy, for instance and deference altogether being far more prevalent – more believing the rulers no best than railing against them and their interventions.

And this is what’s saddest of all about the Tea Party and Operation Rescue, the latter going so far as to engage in civil disobedience. All this energy and pent up rage, all this activism, use of leftist tactics and language – ‘we, the people’, they shout, listen to us, gather with us, attack the government; all for the wrong cause, shooting themselves in the foot.