The Tories are talking about the Big Society; anti-capitalists are talking about self-organisation and the commons; and the anti-cuts campaigns are demanding the preservation or re-instatement of state run and controlled services. Amongst this finding a radical critique of the state whilst defending those state services; finding a critique of self-exploitation whilst acknowledging the great things communities and small groups are doing to change lives and empower people – is not always easy. To take a concrete example we did a couple of interviews with some people running a community library in Hackney, North London. 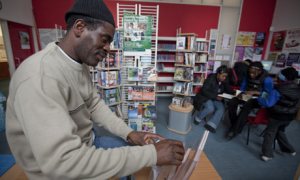 Woodberry Down is a huge run-down estate in Hackney with a population of 280,000. It has had a long planned and long delayed regeneration programme, resulting in repairs not done and empty flats; along side a huge building site for a flashy new development of ‘mixed housing’.

The Woodberry Down Library used to be a large library in an impressive building in the middle of the estate. It was popular with the local community and especially with the children who used to come in after school as a place to hang out.

In 1996 the library shut down: the community were ‘up in arms’ and occupied the building for several weeks, but were not able to prevent the closure. The council had severe financial problems at the time and claims it was underused – in terms of the level of library membership. Some other libraries were also closed at the time, leaving only 7 branches open in Hackney.

The building was turned into the Robin Redmond Community Centre shortly afterwards.

Then in 2006 after some regeneration funding, a survey of local needs was done, identifying a library as a third priority. The council still claimed they couldn’t fund it. A group of council officers formulated the concept of a ‘community-led library, run by volunteers, owned by the community and only requiring low revenue expenditure’.

In March 2007 a small room in the community centre was opened as the library, staffed entirely by volunteers. The funding for the room and the original stock (£61,000) came from regeneration money. The volunteers were recruited by the council through local newspapers, leaflets and a council run meeting.

Although it is a called a ‘community led’ library, it is a library run by the council, but just with unpaid workers. It has all the support and infrastructure of the council library service such as new stock and the linked IT system; but also the constraints. The volunteers are employees in the hierarchy of the council with the same lack of autonomy, but just without the pay.

The books, equipment and IT are centrally ordered and books can be dropped off at other branches to be brought back to Woodberry Down. The volunteers and users can and do make recommendations to the council as to which books to get and can order books from any of the other larger libraries to be collected at Woodberry Down. This is the same for all libraries.

There are volunteer meetings – but as it is hard to get them all together at one time these tend to be quite sporadic. The library suffers from not having a paid person in terms of the overview and continuity. In terms of autonomy and decision-making, the volunteers can make recommendations to the council on things such as which books to stock, and of course on each shift the volunteer are in charge of the shift.

The volunteer recruitment process is managed by the paid council workers: there is an application form, an interview, a CRB check and a six-week training course (one day a week) shadowing someone at a larger library. After that process you meet the other volunteers.

There are three main kinds of people who volunteer; Firstly those who have spare time – for example after retirement, or after the kids have left home, and want to do something interesting and worthwhile. Secondly those who are wanting to get into paid employment and need a recent work experience and reference. The third – and growing – category is those pressured by the job centre. For example those receiving JSA who are being told to take various steps in order to be entitled to benefit. There is currently only one volunteer from the Woodberry Down Estate – although most are local.

Many of the volunteers do go on to get paid work – leading to a high turn-over. Some get jobs in the library service – but the library work can help get all kinds of ‘customer service’ work. Since it opened there have been about 75 volunteers, about 25 of whom have gone on to get paid work. The council worker was very proud of this and saw it as one of the main positive outcomes of running the library with volunteers; offering a service to the unemployed to help them become more employable. The idea of reopening the library was approved by the council largely to help the unemployed back to work or, at least, to engage them in the community.

The library as a community space

The positive difference between Woodberry Down and the other libraries is the chatty and informal atmosphere. “It feels like a social club sometimes. People come in to talk about their lives and their problems. Often the same people come in and the volunteers often have the time to talk. For example one teenage boy comes in after going to a course in the centre and asks advice about his girlfriend.” The room feels quite cosy. They do sometimes talk about the problems on the estate. But when I asked if they could imagine that conversation becoming collective – e.g. a few people coming in and talking about it, or even using the library as a space to meet and discuss the problems and maybe form some kind of group – the answer was no. It is individuals discussing it in the context of their individual lives and problems. The volunteer could not imagine the library space or the regular users being a launching space for any other community projects. The usual divide of service users and service providers was mostly just the same as other council services – albeit a bit more informal and chatty.

There is a sense of frustration and anger that the library is not better funded – it is often closed at short notice when a volunteer can’t make it in and there are not many new books coming in. You can request to have them delivered to the library from other branches, but there is not much new stuff to browse.

When the library started to be run by volunteers, the paid staff in other branches did see it as a threat and were worried for their jobs. As a response to this there are no volunteers at all in the other libraries. People are told if they want to volunteer in Hackney, it is only Woodberry Down that takes volunteers. This was a way of protecting the staffing levels at the other libraries. This is not the case all over London, for example in some South London boroughs there are often volunteers working in the main libraries.

Far from being a model of community activists running their own library with council funding – with the potential of being a hub of local activism – Woodberry Down Library feels like a library run on the cheap – a bit unreliable, a bit shabby and understaffed – but apparently good enough for a run-down estate on the edge of the borough. The volunteers did seem happy and committed and the atmosphere was very friendly. But an example of the cuts leading to self-organisation and self-empowerment, albeit with increased self-exploitation? No. We’re afraid it looked a lot like increased self-exploitation without the political or group empowerment – with however a feel-good factor for the individual volunteers that they are keeping the library open and are part of something good.

View all posts by c0mmunard

One thought on “an image of the ‘big society’? a report from woodberry down community library”