Like many of the great revolutions in history, the current wave of democratic uprisings surprised all the intelligence experts and media pundits. Not only has the hated NUS chief Aaron Porter been displaced in a palace coup, but so too have dictators such as Ben Ali and Hosni Mubarak. 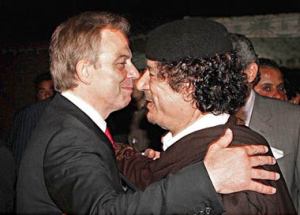 This element of surprise in the Arab revolt has left many of the great and good caught with their pants down. If dictators are falling, it’s not the right ones, and the changed situation has left some cosy friendships rather exposed.

An article in today’s Times argued that the current democratic movement is a vindication of the ‘domino effect’ strategy for the war on Iraq (topple Saddam and other populations will struggle for democracy too): a view recently trailed in the Washington Post by Project For A New American Century ideologue Elliott Abrams.

Sadly this analysis has been rather undermined by the public statements on current events by the architects of the war, for example Tony Blair’s description of Hosni Mubarak (“Immensely courageous and a force for good”) or the views of Paul Wolfowitz (“It is wrong to say that the wars in Afghanistan and Iraq were fought to promote democracy… but once those regimes were removed we could not reimpose dictators”.)

Indeed, the currently-most-high-profile target of protest, Libya’s Colonel Gaddafi, was until recently held up as the model of a ‘convert’ rogue state, a pariah brought in from the cold. His 2003 decision to scrap Libyan WMD was itself used as a justification for the war in Iraq, showing that Western pressure works. He became respectable again, meeting with leaders such as Tony Blair, Gordon Brown and Nicolas Sarkozy. The now ‘anti-terrorist’ Gaddafi won further plaudits by building a string of detention centres along the country’s northern coast, the ‘front line’ of Fortress Europe’s battle to exclude ‘illegals’ migrating north across Africa. Last year’s release of Lockerbie bomber al-Megrahi was no doubt in part a reward for Libya’s ‘good behaviour’.

The régime also sank roots in the UK establishment. My own university, London School of Economics, today announced the end of a programme in collaboration with the ‘Gaddafi International Charity and Development Foundation’, until now defended as “an NGO committed to the promotion of civil society and the development of democracy”. The university retracted this vile cant “in view of the highly distressing news from Libya over the weekend of 19-20 February”, as if this repression marked some sudden change of heart. Did these experts of political analysis not know of the 1996 prisoner massacre, which saw 1,000 deaths, or of Gaddafi’s personal attendance at his opponents’ executions? LSE went so far as to give the bloodsoaked dictator a platform: this lecture, by video link, took place just three months ago.

David Cameron has had to defend the UK’s record collaboration with the Libyan régime, to the point of selling it weapons. He advocates ‘peaceful reform’ only once the Arab crowd have already made a radical rupture a reality in the streets;  and elsewhere in the region blissful ignorance and arms trading can continue apace. They fear change more than they do the ‘calm’ of populations held in silence by terror. Still today the Saudi monarchy, the US’s most important Arab ally, goes unquestioned. Indeed, any other stance might somewhat torpedo Cameron’s current ‘trade mission’ around the Middle East, a whistle-stop tour of the region with former PM John Major in order to… sell weapons.

This morning at work I noticed a publication Computer Weekly, whose front page bore an image of protesting Egyptians and the headline ‘Will Egypt turmoil spark IT outsourcing crisis?’. Perhaps this glaring lack of perspective was connected with the fact that the magazine’s cellophane wrapper had as yet not been troubled by man or beast.

Recent debates over the fate of the planned Bahrain Grand Prix showed similar disregard for the gravity of events. Readers commenting on Formula 1 websites such as crash.net were split roughly half-and-half between those who advocated that the race be boycotted, and those who said it should be cancelled anyway because the track is “boring”.

Formula 1 ringmaster Bernie Ecclestone pointed to the hypocrisy of those who called for the motor racing circus to repudiate Bahrain only now that protests have broken out: “It seems as if people thought it was democratic a few weeks ago”. The implication was that at least he was standing by the dictator he had long supported, which hardly did him much credit.

The sport has strong commercial links with Gulf dictatorships, such as the Bahrain royal family’s part-ownership of the McLaren team (drivers Lewis Hamilton and Jenson Button were thus barred from commenting on the matter). Moreover, recent races in Bahrain and Abu Dhabi offered the spectacle of BBC journalists bowing and scraping before the desert kingdoms’ rulers – “thanks for putting on this lovely event”… never mind the brutal conditions of the pan-Asian migrant workforce who labour to build the tracks.

Many F1 personalities insisted on the need to “stay out of politics”, even though the desire to suppress protest before the race, a monument to the régime’s vanity, certainly did weigh on the Crown Prince’s mind. In fact, far from being apolitical, the sport has a long track record of association with far-right régimes: in the 1930s it was heavily based on Italy and Germany. Moreover, not only was the previous head of the motor racing governing body Max Mosley – son of blackshirt leader Oswald – but his predecessor Jean-Marie Balestre was a member of the Waffen SS.

The Venezuelan state oil company PDVSA is a rather odd addition to the ranks of Formula 1 sponsors, although Hugo Chávez has been keen to champion a new driver from the country, Pastor Maldonado. This move is somewhat surprising given that in 2009 on live TV Chávez ordered troops to occupy two golf courses, on the basis that the gentle pastime is “a bourgeois sport”.

But unlike the Grand Prix set, who have now abandoned the Bahrain race, Chávez is no mere fair-weather friend of Arab tyrants. The International of authoritarians sitting on lakes of oil is closer-knit than that.

Of course, as yet we do not know if William Hague’s claim that Colonel Gaddafi has fled to Venezuela is true. But what do we know? First and foremost, that Chávez has repeatedly and unequivocally voiced support for authoritarian and far-right régimes, and that Gaddafi stands prominently among these.

In September 2009 Gaddafi visited Chávez in Caracas (at the same time as Robert Mugabe) and signed a series of bilateral military and trade accords. Chávez presented Gaddafi with a sword supposedly used by Latin American independence leader Simon Bolivar, and sealed a pact establishing Libya as his primary ally in the Middle East. The Venezuelan ambassador in Tripoli justified this alliance: “Libya is the gateway to Africa for us because it is a country well-known for its socialist policies that plays an important and strategic role for us.”

Perhaps all this was just an opportunist show of defiance: a finger in the eye of the United States. Maybe it was a gaffe. But if he offers refuge to the Libyan dictator as he is chased out by the just wrath of the people, then Chávez will show himself to be worse even than just a confused anti-imperialist, but as providing sanctuary for one of the world’s most reviled tyrants. ‘My enemy’s enemy is my friend’ plus ‘a friend in need is a friend indeed’ does not a socialist foreign policy make.

One thought on “a friend in need is a friend indeed…”