Issue 23 of The Commune is now available. It features articles on the ongoing struggles in Egypt, the build up to the 30th June strikes, AC Grayling’s private university, and much more. 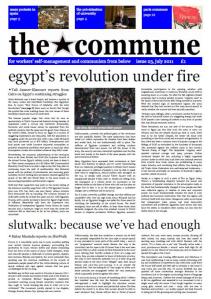 Click the picture above to see PDF, or see below for list of articles as they are uploaded. Email uncaptiveminds@gmail.com if you are interested in purchasing a printed copy, or in distributing The Commune.

grayling’s atrocity: and what to do about it – Daniel Harvey looks at New College of the Humanities, AC Grayling’s private ‘university’

why us? possilpark youth speak out against dispersal zone – Dawn Hunter introduces an interview she conducted with youth in the Possilpark area of Glasgow, subject to a trial ‘dispersal zone’ order

making a killing: suicide under capitalism – Tom Denning writes on the social meaning of suicide

the first working-class revolution – 140 years after its defeat, the legacy of the Paris Commune is still hotly contested. Clifford Biddulph explains its meaning