Democracy is derived from the Greek Demos (People) and Kratos (Power). This is what we are seeing on the streets of Athens – people power versus the EU/IMF dictatorship. But what are the roots of this debt crisis and why does the EU/IMF demand austerity? 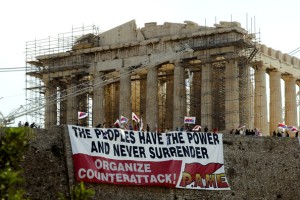 To understand why each Greek owes €30,000 in debt requires an understanding of the role of credit in the capitalist system. Fractional reserve banking allows banks to lend more money than they actually have. In boom times everything looks rosy to the capitalists and credit is extended and profit rates look healthy. But this expansion of credit fuels overproduction. It then starts to dawn that debt-saturation means not all loans will be repaid. Banks become reluctant to lend to one another and credit dries up. This is a credit crunch. As capitalists retreat to cash, effective demand in the market reduces and a recession occurs.

This role of credit is essentially the issue for Greece. But we need to look at recent economic history in a wider context to grasp how we have arrived where we are. In the late 1960s the post-war boom was coming to an end. The rate of profit started to decline. In 1971 Nixon decoupled the dollar from gold. This allowed the US to expand the amount of dollars without any constraint coming from the amount of gold it held. This fiat (token) money regime is the main reason why the 1970s were inflationary rather than deflationary, like the 1930s. Rather than a huge devaluation in capital and mass unemployment, inflation reduced the real wages of workers. But this assault on workers wasn’t enough to restore profitability.

The organised working class in the unions had to be smashed. Hence Thatcher and the Miners’ Strike. But even this wasn’t enough. Much of the reported increase in profits since the 1970s comes from financialisation. This is credit largely deriving from the printing of dollars and US Treasury Bills. But rather than finance simply being a means of allocating surplus savings to investment to increase the productive power of the economy, a lot of the ‘investment’ went into assets such as property and shares. This asset price inflation has been central to the high reported profit rates for the last couple of decades. Indeed for many multinational corporations, more money has been made from these financial ‘investments’ than from productive activity. Capital that isn’t put to any productive use is called fictitious capital.

However, it must also be recognised that also the collapse of the Soviet Union and the rise of China have greatly contributed to profit rates. It is also likely that the EU single market has broken down barriers and contributed to growth. But it is predominantly the flood of US dollars, freed from any tie to gold or any other money commodity, that has led to the huge growth in credit and the dominance of finance capital as exemplified by the likes of Goldman Sachs. These investment banks are ‘too big to fail’. A view that was reinforced by the collapse of Lehman Brothers in 2008 when governments around the world, but particularly in the USA and UK, had to bailout their banks. So much for market forces! The state and capital are clearly joined at the hip. Despite such huge sums being pumped into the banks they are still exposed to potentially crippling losses such as the Greek government defaulting on their €340 billion debt.

Of course it’s not just Greece. The bailing out of the banks by governments and the severe recession that followed the collapse of Lehman Brothers has shifted the focus onto sovereign debt.

Both Ireland and Portugal have had to accept money and the resulting austerity and plunder from the EU/IMF dictatorship. Not forgetting Iceland and their British-Dutch bailout of investors that they are now having trouble passing onto Icelandic taxpayers.

Once again the banks expect taxpayers to come to their rescue when Greece defaults, as it most likely will do at some point. But taxpayers cannot bail out the entire debt of Portugal, Ireland, Greece, Spain and Italy. Not to mention the UK and the really big one: the USA. US public debt is now $14 trillion – equal to its GDP. European and US banks, indeed the world banking system, is actually insolvent. They will never get their money back. And despite their heroic efforts in postponing the collapse of capitalism in the autumn of 2008, taxpayers are unable to fund the sums needed to save the ‘too big to fail’ banks. They are ‘too big to save’.

Soon the realisation will dawn that government bailouts to save banks from government defaults is no resolution and that the entire capitalist system is bankrupt. Whether this comes out of the Greek crisis or a future one, such as Spain or the US, remains to be seen. But when it does come the financial panic and economic collapse will likely be huge. Such material conditions will only give rise to more people power and demands for true democracy.

One thought on “understanding europe’s crisis”