Barry Biddulph reports on the November 30th strike day in Sheffield, which saw little scabbing, but a demo no larger than on June 30th. 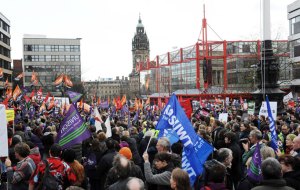 There were about 2,000 at the rally and demo, with official trade union flags dominant. The demonstrators were not the usual suspects. I recognised a number of people I would not have expected to be on a demo: many would have had their first experience of a demo and political leaflets . We gave out 150 issues of The Commune and 500 leaflets . I had expected about  5,000 on the rally/demo since there were about 2,000 in June when the main council unions were not on strike.

I think this means that, in the main, the strike in Sheffield was a passive one, with the vast majority of strikers shopping or staying at home. My impression from conversations prior to the strike was that many simply wanted to avoid picket lines. Some took Thursday and Friday off to have a five-day break.

The various left groups were in attendance, but did not seem to be giving out leaflets apart from the CPGB. I did not see any Socialist Party leaflet, nor were the SWP giving out leaflets. SWP seemed to be unable to sell their paper: given the composition of the rally, this was not suprising. The SP and SWP had few banners, and most of their members were wearing their ‘trade union hats’.