Duvinrouge says many ‘socialists’ have got pleasure from seeing Krugman expose the prejudices and flaws in those advocating austerity as a solution to the crisis. He is right that austerity won’t work and is mainly being pursued for ideological purposes. However, he is wrong to believe that Keynesian fiscal stimulus can solve the crisis. He is wrong because he misdiagnoses the crisis and misunderstands the nature of value.

For Keynesians like Krugman, the problem is a lack of demand because the private sector is not investing. Without a surge in exports they argue that it is the government’s job to take up the slack and restore effective monetary demand. This would have some merit if the problem was just a lack of demand due to producers not investing and instead hoarding their money. But this ignores the mountain of debt and the reasons why there is so much debt.

END_OF_DOCUMENT_TOKEN_TO_BE_REPLACED

Duvinrouge: Can you tell me what the key message of your new book, The Failure of Capitalist Production, is?

Andrew Kliman: The Great Recession was waiting to happen. There were unresolved problems in the system of capitalist production that had been building up over a third of a century. The rate of profit fell and never recovered in a sustained manner, which resulted in persistently sluggish investment and economic growth, which in turn resulted in rising debt burdens. And these problems induced governments to solve them or paper them over with policies that made the debt build-up even bigger. 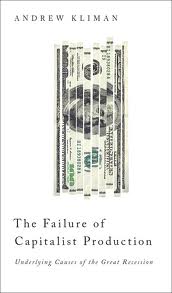 DVR: Your book is full of statistics and as we know interpretations of statistics can be very different. It would appear that your choice of historical cost as opposed to current cost is crucial. Please can you explain the difference?

Accountants can value assets at their current cost or at their original cost when they were acquired. The latter is usually called their “historical cost.” Both methods have their place. But one thing you can’t do is compute the rate of profit, i.e., the rate of return on investment, by dividing profit by the current cost of the capital assets. It’s not wrong to do this; it’s impossible. What you wind up with just isn’t a rate of return on investment. What the assets are currently worth is simply not the same thing as the amount of money that has actually been invested in them. To measure the latter, you have to take their historical cost and subtract depreciation.

END_OF_DOCUMENT_TOKEN_TO_BE_REPLACED

This article is designed to question a number of theoretical assumptions implicit in much Marxist – including autonomist or left communist – writing on the crisis. In particular, I want to question assumptions around capitalist contradictions, capitalist decline, and the role assigned to financial and ‘fictitious’ capital.

My argument is that these assumptions paint a model of a decaying ‘collapsing’ capitalism (hence my term ‘collapsism’). They also fetishise the mechanics of capitalist functioning at the expense of the real social relation underlying them – the class struggle.  It is class struggle, not some quasi – mystical ‘debt meltdown’ or ‘falling rate of profit’, which constitutes capitalism’s permanent crisis. END_OF_DOCUMENT_TOKEN_TO_BE_REPLACED

Guillermo Almeyra outlines an alternative to the Cuban government’s plans to slash 20% of the workforce and privatise parts of the economy in order to deal with the crisis.

Predictably, the global crisis – together with the criminal US economic blockade – is now taking an even heavier toll on Cuba, reducing levels of tourism and remittances sent home by Cubans abroad.The growing difficulties of the Venezuelan economy, as well as the aggravation of climactic disasters, are also factors we have to consider when looking at how to save the island from economic abyss. 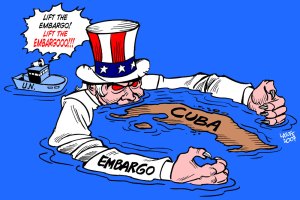 Cuba is a country which has been in deep crisis for more than 20 years – a whole generation – and which has no real change nor encouraging signs on the horizon, merely a hard struggle for survival, which besides is led by the same system and the same leaders who have helped create the current disastrous situation and do not know how to escape it. END_OF_DOCUMENT_TOKEN_TO_BE_REPLACED

Our ‘Beyond Resistance’ summer school is now just two weeks away. The event takes place from 11am-6pm on Saturday 19th June at 96-100 Clifton St, London EC2. All welcome. Click here for a new page listing session and ticketing information.

We have confirmed more details of the session on the capitalist crisis, which will feature speakers David Harvie (Turbulence; The Free Association; Lecturer in Finance and Political Economy, University of Leicester) and Alan Freeman (International Working Group on Value Theory; Co-editor, Critique of Political Economy).

The current crisis has been the worst since the Great Depression. And just as with the great depression it caught the left largely unprepared. The need to understand the current crisis and the nature of crisis under capitalism has never been greater. END_OF_DOCUMENT_TOKEN_TO_BE_REPLACED

Mark Ellingsen gave an introduction to a session at the recent Global Commune day school in Edinburgh:

If you ask people what they expect after the general election most people will answer public sector cuts. These will indeed dominate the coming weeks and months, but it is useful to step back and take stock of where we are. END_OF_DOCUMENT_TOKEN_TO_BE_REPLACED

The Great Hall at King’s College London was packed to capacity and beyond on 28th April, with people standing at the sides and sitting in the aisles. It put me in mind of Nathan Coombs surmising on where all the numbers of the left attending academic conferences were the rest of the time.

How can we, maybe, capture and utilise the level of interest shown on these occasions? This particular audience was made up of SWPers and Kings College and other students. The usual papers were sold outside. END_OF_DOCUMENT_TOKEN_TO_BE_REPLACED