On 26th January, college students around the country will walk out.  The student movement which made such an impact in November and December will begin again.  A number of students and supporters around the country have worked together to produce a bulletin, which can be printed out and distributed in order to build the walk-outs.  ﻿Click here to download and print!

Today is the fourth major day of action against the government’s attack on education.

Much about this movement has been new and original, and that can only be a good thing. The aspiring politicians who lead NUS have been swept aside.

We have stood up for ourselves in spite of media condemnation. The protests and occupations have benefited from being lively and spontaneous. While suited NUS leaders wanted to debate politicians on friendly terms in TV studios, the movement has shown real militancy and anger at this government of millionaires trying to screw us over. END_OF_DOCUMENT_TOKEN_TO_BE_REPLACED

Mark Harrison presents his personal recollections of Sunday’s Education Activist Network Conference and his thoughts on the student left.

So I went to this Education Activist Network (EAN) conference on Sunday. I am glad that I went, as it was better than I expected and actually invigorated me to return to my campus filled with new ideas for action, although the Socialist Workers Party continues to disappoint me. END_OF_DOCUMENT_TOKEN_TO_BE_REPLACED

Lecturers and students alike nowadays cynically describe university education as a ‘factory’. This is, of course, a term of abuse – just think of the disturbing image from Pink Floyd’s The Wall of a conveyor belt of comprehensive students dropping into the mincing machine and emerging as a string of sausages out the other side.

The notion of the University as a mechanised profit machine is where the term derives its critical force. When the philosophy department at Middlesex University was shut down, the ‘Save Middlesex Philosophy’ campaign’s occupation strung an enormous banner out of a first floor window reading: ‘The University is a Factory[.] Strike! Occupy!’ The slogan became the emblematic image of the campaign, and hanging above a neoclassical statue with fist pumped into the air, it endowed the campaign with an uncompromising, industrial proletariat aesthetic that served to reinforce its militant credentials.

END_OF_DOCUMENT_TOKEN_TO_BE_REPLACED 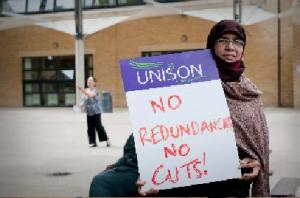 Earlier this year 68 members of staff at Hackney Community College were issued with notification of possible redundancy. After two successful, solid strike days, negotiation and many voluntary redundancies there are now only a handful of people facing compulsory redundancy. END_OF_DOCUMENT_TOKEN_TO_BE_REPLACED

There is a simple question that needs to be addressed in regard to the Save Middlesex Philosophy campaign: How was it that a campaign that had such momentum, energy and colossal international support collapsed so rapidly and in such acrimony?

Only in May the Trent Park mansion house that housed the department was under occupation, a ‘transversal space’ had been established, and every day newspaper reports and new letters of support were arriving. Like many others, I was disappointed to see the occupation come to a premature end. But it seemed with the rally at Hendon and camp site erected on the grass outside that the campaign was not going away. One academic had already withdrawn their visiting lectureship, and the University and College Union (UCU) had finally agreed to come on side and take action at the start of the new academic year. If ever there was a chance to win this was it.

So what happened? On the 8th of June the campaign website announced a significant ‘victory’ that the philosophy department’s research centre would be moving to Kingston university. Already this sounds a little odd since the campaign was from the start concerned with saving Middlesex Philosophy. However, things get worse on close inspection. Only four of the senior academics—Peter Hallward, Eric Alliez, Stella Sandford and Peter Osborne—would receive jobs at Kingston, whilst two of the more junior members—Christian Kerslake and Mark Kelly—would not.

The comments thread in reaction to the announcement revealed that Kerslake and Kelly had not even been consulted regarding the deal cut with Kingston. Possibly worse, Kingston university would only absorb the PhD candidates and Masters students, not the undergraduate body. It would be galling under any circumstances for an undergraduate cohort to be abandoned by all their senior academics; the fact that the undergraduates took a key role in establishing, maintaining and fighting the campaign (thus, at least to some extent enabling the Kingston deal) makes their desertion appear all the more outrageous.

Perhaps the most disturbing possibility is that students were being egged on to take borderline criminal actions at the same time as some academics were cutting backroom deals on jobs. The letter drafted by the senior academics to explain their choice—and it was their choice, since no one, not even their  fellow academics were consulted—declares that they decided to opt for Kingston’s offer when they realised the campaign was unwinnable: defeatism coinciding conveniently with self interest. At what point was it unwinnable? What is winnable before contracts were signed and unwinnable afterwards? All in all, a perfect example it seems of hierarchical power relations overriding democratic decision making.

The biggest blow this turn of events delivers may be to wider morale in the anti-cuts movement in education. By decamping to Kingston the campaign’s supporters are meant to be reassured that philosophy has been saved. Quite frankly, if this is what radical philosophy looks like in action, some will wonder whether it is worth saving in the first place.

What do you do when, without warning, you are told ‘Yes, your class now has a new centre to work from, but the students who need childcare must contact the student advisers to arrange a childminder’? You haven’t seen the centre yet, nor spoken to any of your students since your last centre was closed to you on Health and Safety grounds. You’re just back from holiday, and looking forward to seeing everyone. Still in holiday mode, at first I didn’t really take in the implications of this. I hadn’t been consulted, there was no discussion. It all felt a bit unreal. END_OF_DOCUMENT_TOKEN_TO_BE_REPLACED