1) All on the minimum poverty wage of £6.08 p/hour and are demanding the London Living Wage of £8.30 p/hour.
2) Often not paid for the hours they work.
3) Not provided appropriate equipment or protection.
4) Discriminated against by their managers. For example, some Hindu cleaners are called ‘bloody Indians’, whilst some larger employees are called ‘pig heads’
5) At threat of seeing 50% redundancies. The remaining 50% of the cleaners would be expected to cover the work of those made redundant with the same hours and with no extra pay!
6) Prejudicially excluded from the so-called John Lewis partnership. END_OF_DOCUMENT_TOKEN_TO_BE_REPLACED 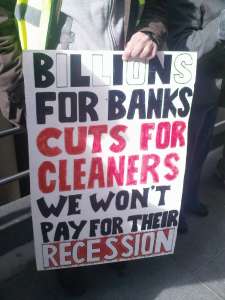 Outside St Paul’s the Royal British Legion had set up a poppy selling stall, “Shoulder to shoulder with all who Serve”. From this side of the cathedral one couldn’t yet see the occupation site, and the reminder that ex-servicemen are obviously not given decent enough pensions to live by seemed especially pertinent, in a time when concessions made to the working class in the aftermath of World War II are all under attack. 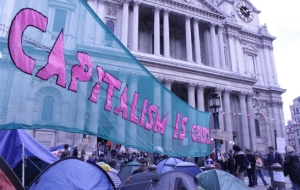 The ruling class were wise then to introduce the welfare state, they knew that social unrest was brewing. The years prior to the war too were full of suffering; it truly was a Great Depression.  During the Blitz public space also came to the forefront. It took an organised committee of citizens to eventually gain permission to access the London Underground stations for protection. With 40% of Britain’s housing stock flattened, the authorities eventually had to overlook squatting. Paternoster Square was the intended site of this occupation: formerly a public square it is now owned by the Subishi Estate Company which prior to the protest, oh so gracefully permitted 24 hour access. It is fine to come to London to work and shop. The profiteers are at least spooked, The Canary Wharf Group plc has just obtained a high court injunction preventing “any persons unknown remaining on the Canary Wharf estate in connection to protest action.” END_OF_DOCUMENT_TOKEN_TO_BE_REPLACED

The IWW IU 640 Cleaners Branch Is fighting to get the living wage at Heron Tower. The cleaning company LCC accepted they would pay it, but now are bullying our members, reducing the working hours and increasing the work load

Our position is clear: any increase in salaries must be real and not be offset by any reduction of working hours or increased work load.
FOR A REAL LIVING WAGE!

Call-out from the Cleaners’ Defence Committee 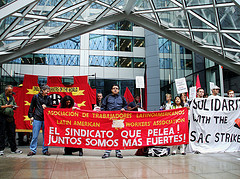 On Thursday 21st October the Cleaners Defence Committee will hold a mass meeting covering cleaners struggles in UK and Berns, at UCL. After the demonstration on Friday 22nd October there will be a social in aid of the Berns workers at LARC, and there will be 3 meetings that will include coverage of these struggles at the Anarchist Bookfair on Saturday 23rd October. END_OF_DOCUMENT_TOKEN_TO_BE_REPLACED

A call-out from activists at University College London. See here for an Evening Standard report on the cleaners.

At UCL most cleaning services and all catering services are outsourced. A number of different contracts currently exist, with varying employment terms for cleaners specifically. 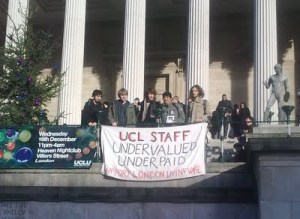 All outsourced cleaning staff, of which we estimate there to be around 180, receive well below the London Living Wage – many are on £6/hour, while others are on the National Minimum Wage of £5.80. END_OF_DOCUMENT_TOKEN_TO_BE_REPLACED

There will be a mass demonstration outside the offices of London & Regional, 55 Baker Street, London W1U 8EW on  Friday 17th September 2010 from 4-6pm.

This follows a very successful mass demonstration on Friday 13th August. Since our action demonstrations in Sweden have gone up to 4 times a week. We want Berns Salonger and their parent company London Regional to know we too are not going away. Please speak to your comrades, colleagues, fellow workers and friends and mark the date in your diary. Let’s all set aside the time to make this an even bigger and more successful demonstration. END_OF_DOCUMENT_TOKEN_TO_BE_REPLACED

An IWW member reports on a recent demo in London in solidarity with migrant cleaners at Berns Salonger, a Swedish night club which has seen a long-running dispute over victimisations, low wages and 22-hour shifts.

On 13th August 2010 the Cleaners Defence Committee, London IWW Branch, and other supporters demonstrated outside the offices of London Regional [the club’s owner] in solidarity with the SAC [the workers’ union] for two hours, handing out information to the staff and passers-by.

The turnout was good and was supported by other groups including branches of The Rail and Maritime Transport Union (RMT) Solidarity Federation, Feminist Fightback, Latin American Workers Association, London Coalition Against Poverty amongst others. END_OF_DOCUMENT_TOKEN_TO_BE_REPLACED

Demonstrate outside Ferrexpo’s office in London on Friday 3rd September from 4:30pm at 2-4 King Street, SW1. Click here for flyer.

A major dispute is underway between mineworkers in Poltava in central Ukraine and Ferrexpo Plc, a major player on the global market mainly engaged in mining of iron ore. All three shifts in the open cast in the town of Komsomolsk, of more than 300 workers each are now involved in industrial action. Some railway locomotive drivers and workers on the iron ore concentrating factory have joined in solidarity. 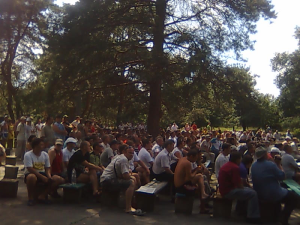 The action started on 1st August at 10am when the workers at the ore-dressing open cast pit started at first with a go-slow and work-to-rule. The action began when haul trucks drivers on their way down to the 305 meter deep quarry reduce speed of the vehicles from normal 40-45 km/h to the more safe 10-15 km/h. Excavator and bulldozer operators, as well as drilling technicians then joined the action in solidarity. Within 24 hours of the workers’ action total rock production had fallen by less than 60% of normal volume. This impact of the workers resistance is continuing. END_OF_DOCUMENT_TOKEN_TO_BE_REPLACED 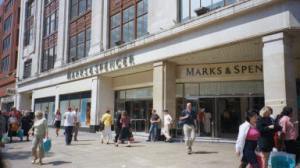 A protest in solidarity with cleaners in Stockholm forced to work 22-hour shifts and receive illegally low wages by a subsidiary of British firm London & Regional. From 4pm this Friday 13th August from 4pm at L&R’s 55 Baker Street, London offices.

This demo was called by Cleaners’ Defence Committee, established earlier this year to organise solidarity with migrant cleaners at UBS bank in the City of London. For more details, email cleanersdefencecommittee@gmail.com.

The Cleaners’ Defence Committee, established earlier this year to organise solidarity with migrant workers in the City of London, has called two actions in solidarity with low-paid cleaners at the plush Berns Salonger nightclub in Stockholm.

These workers have been in dispute for 21 weeks, with a series of mass pickets in protest at illegally low wages, victimisation and shifts as long as 22 hours. Our protest is against the British concern London & Regional Properties, which owns the nightclub. END_OF_DOCUMENT_TOKEN_TO_BE_REPLACED

People who support migrant cleaners’ struggles in London may well know of Juan Carlos Piedra, an Ecuadorian worker victimised at University College London because of his trade union activism. He has also been active in the solidarity efforts behind UBS bank cleaners in the City of London.

Juan Carlos has been called to an interim hearing for his Employment Tribunal with LCC Services on Tuesday 25th May from 10 am. It is to be held in East London Tribunal Service, 2nd Floor Anchorage House, 2 Clove Crescent, East India Dock, London, E14 2BE. Nearest station is East India Quay DLR. He  is asking as many people as can come to be there from 9.30 in a show of support and solidarity. A strong presence can help sway the decision made. END_OF_DOCUMENT_TOKEN_TO_BE_REPLACED

On Friday 23rd April the traditional St. George’s Day celebrations returned to the City of London after a 425-year gap: but the streets of this capital of capital also witnessed events more internationalist in character.

As many as 100 people turned out for the latest in a series of demonstrations in solidarity with the migrant cleaners at Swiss bank UBS. The widely-supported campaign against an effective 11% pay cut and the victimisation of shop steward Alberto Durango has put management on the back foot (more details soon) and also served as a rallying point for a number of inter-related struggles. END_OF_DOCUMENT_TOKEN_TO_BE_REPLACED