We have produced a pamphlet on the subject of workers’ control and management, counterposing working-class power exercised from below to nationalisations by the bourgeois state.

The struggle for self-management (by Solidarity)

An exchange between Solidarity and the Institute for Workers’ Control

The ambiguities of workers’ control (by Solidarity)

The Harrogate debates: the 1977 debate between the then secretary of state for energy Tony Benn and Arthur Scargill and Peter Heathfield from the NUM on workers’ control. Includes summaries of contributions from the floor.

As indicated above, we have posted some of the contents on this website already, but we have not yet uploaded the Harrogate debates piece, which represents about half the pamphlet’s length.

If you would like a copy of the 26 page pamphlet, email uncaptiveminds@googlemail.com or write to us at The Commune, 2nd Floor, 145-157 St John Street, London EC1V 4PY. 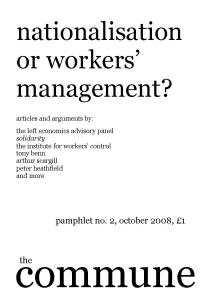 Comrades may be interested in a look at some of the following articles, which relate to the subject of our 29th September ‘uncaptive minds’ forum on ‘the debates over workers’ control’ in the 1970s workers’ movement.

Self-management in the struggle for socialism (by Raptis, aka Pablo)

The ambiguities of “workers’ control” (Solidarity)

The struggle for self-management: an open letter to IS comrades (Solidarity)

This piece is from a slightly earlier period but is still of interest:

The Commune has opened a discussion on the meaning of workers’ self-management and workers’ control, two concepts which are often confused with each other and given a wide range of meanings, from trade union participation on management boards to collective ownership and management of a workplace by its workers themselves. We will be having a forum on the question on 29th September, but are also looking to stimulate a broader debate in the movement.

We will soon be publishing a review of the new Left Economics Advisory Panel pamphlet on “social ownership for the 21st century”, and have also put online two pieces from previous debates on the meaning of “workers’ control”: an exchange between the libertarian socialist ‘Solidarity’ group and the Institute for Workers’ Control as well as the piece below, also from ‘Solidarity’. END_OF_DOCUMENT_TOKEN_TO_BE_REPLACED