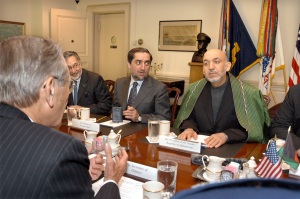 The deterioration of the situation in Afghanistan over the last eighteen months has seen the gradual reassertion of the Taliban’s territorial presence. The widespread fraud, vote rigging, and ballot stuffing of August’s presidential election led to a run off between Hamid Karzai the incumbent and the other main candidate Abdullah Abdullah. This process was a total flop, an embarrassment for the occupying American forces as Abdullah, disputing the possibility of a fair result devoid of fraud, refused to participate further. Hilary Clinton spoke of Abdullah’s decision as “not affecting in any way the legitimacy” of the process: instead Karzai’s second term in office would supposedly further buttress the strength of the constitutional order of Afghanistan in guiding the Afghan people to a ‘brighter future’.   END_OF_DOCUMENT_TOKEN_TO_BE_REPLACED