David Broder was unconvinced by ‘Anarchism: a Marxist Critique’ by John Molyneux

There’s a bloke who sells the News Line at Broadway Market on Saturdays: Britain’s first-ever colour daily paper is still going strong, it seems. Only thing is, the News Line is the paper of a small Trotskyist group called the WRP, and it could only afford to go full-colour because Colonel Gaddafi was paying for it. So seeing the seller as I walked to the Anarchist Bookfair on the 22nd – two days after the Libyan dictator met his end – I was keen to debate the merits and demerits of this news. He stuck to his (pro-Gaddafi) guns, angrily telling me I “didn’t understand the Marxist theory of the state” and was an “anarchist”.

After the bookfair us Communards went for some much-needed refreshments at the Wetherspoons. At the pub a slightly drunk ‘anarchist’ started chewing my ear off about how much he hated Marxism (“Marx was a totalitarian”) but also his sadness about the passing of Colonel Gaddafi, who had, at least, built lots of hospitals. I wondered whether either this anarchist or my Broadway Market Marxist were particularly good representatives of their schools of thought, or indeed honest in their criticisms of others. END_OF_DOCUMENT_TOKEN_TO_BE_REPLACED 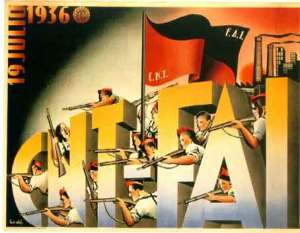 The second meeting of this series is: Monday, November 29, 7pm: Revolutionary Syndicalism and Anarcho-Syndicalism, the Interwar European Experience. Like the other meetings in the syndicalism series, Monday’s will be held in The Artillery Arms, 102 Bunhill Row, London, EC1Y 8ND. END_OF_DOCUMENT_TOKEN_TO_BE_REPLACED

Against Nationalism is a pamphlet produced by the Anarchist Federation. The introduction explains that the document has its origins in arguments around the time of the winter 2008-09 war in Gaza, at which time AF argued for a ‘no state’ solution to the conflict. 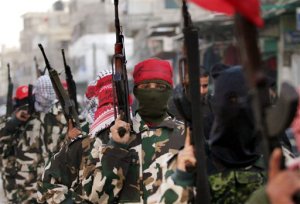 The pamphlet scores a number of easy points against Trotskyist cheerleaders for movements such as Hezbollah and Hamas and details such groups’ anti-working class credentials. However the far more interesting question posed by the pamphlet is the distinction between ‘nationalism’, ‘resisting imperialism’ and ‘class politics’. END_OF_DOCUMENT_TOKEN_TO_BE_REPLACED

The Commune is holding a meeting on Saturday 12th September as part of the Bristol Anarchist Bookfair. The event takes place at The Island, Bridewell St, Bristol BS1 2PY, from 10.30am to 6pm, and our workshop is from 5pm in Room 2 (first floor). 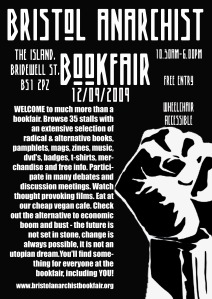 The title of our session is ‘the spirit of utopia today’. With an environmental crisis, continuing poverty, recession & war, and the seeming collapse of alternatives to capitalism, we are living in dystopian times. This talk & discussion will explore the meaning of utopianism today and its importance for recovering our humanity in opposition to its systematic abuse for profit and power. What are ‘concrete’ and ‘abstract’ utopias; is there value in the utopian spirit, or is it just dreaming; and what critiques should we have of the idea of ‘scientific’ socialism? END_OF_DOCUMENT_TOKEN_TO_BE_REPLACED

The Commune is holding a meeting on Saturday 12th September as part of the Bristol Anarchist Bookfair. The event takes place at The Island, Bridewell St, Bristol BS1 2PY, from 10.30am to 6pm, and our workshop is from 5pm in Room 2 (first floor).

The title of our session is ‘the spirit of utopia today’. With an environmental crisis, continuing poverty, recession & war, and the seeming collapse of alternatives to capitalism, we are living in dystopian times. This talk & discussion will explore the meaning of utopianism today and its importance for recovering our humanity in opposition to its systematic abuse for profit and power. What are ‘concrete’ and ‘abstract’ utopias; is there value in the utopian spirit, or is it just dreaming; and what critiques should we have of the idea of ‘scientific’ socialism? END_OF_DOCUMENT_TOKEN_TO_BE_REPLACED

Saturday night, 6th of December 2008, in the Exarhia area of Athens: a countercultural and libertarian stronghold. A group of young people have a verbal altercation with two members of the police special forces. The policemen leave the scene only to return after several minutes. Suddenly, one of the officers, Epameinondas Korkoneas, removes his gun and fires into the group. The bullet strikes and fatally wounds 15 year-old Alexis Grigoropoulos, who falls to the ground dead.  It was the incident that triggered more than 20 days of rioting and unrest that would shock the country. They were “the days and nights of Alexis” as the participants have called them, in memory of the murdered boy. END_OF_DOCUMENT_TOKEN_TO_BE_REPLACED

The rise of a new bureaucratic rul­ing class in Russia in the thirties and forties of the twentieth cen­tury has artificially inflated the stock of several opponents of the social democratic movement who attacked it on the grounds that it was preparing a dictatorship of ‘intellec­tuals’ or men of ‘science’ over the untutored working class.

The subject of this study – Jan Waclaw Machajsky – is one such figure. END_OF_DOCUMENT_TOKEN_TO_BE_REPLACED

On the evening of 22nd April the London branch of the Anarchist Federation and the NE & South London Solidarity Federation held a joint meeting on the subject of “World Economy in Crisis: Who Pays the Price? And How Can We Resist?”. Some 30 people managed to tear themselves away from Manchester United vs. Portsmouth and episode 5 of The Apprentice to make it to the Calthorpe Arms for the meeting.

The speakers leading off the discussion were Bonnie from AFed and Neill from SolFed. Bonnie’s talk was largely on the background to the crisis and how it had come about, and she delved a few times into Marxist analysis and Marx’s categories in order to tell the story of the movements in the world economy. She was near-apologetic for doing so, although it very much seemed to be the ‘meat’ of her talk’s theoretical underpinning: she said she was talking about Marxist economics rather than Marx’s politics, although I fail to see much separation between the two, whatever the state-socialists have done to poor old Marx… END_OF_DOCUMENT_TOKEN_TO_BE_REPLACED

First was the March 28th ‘Jobs, justice, climate’ rally: a quickly forgotten TUC organised trot through central London. Second was the April 1st protest at the Bank of England, where the four horsemen of the apocalypse descended on the Bank, against a fever pitch expectation set by the police and the media about the eruption of a ‘summer of rage.’ Something like 5,000 to 10,000 joined the protest at Bank, and conferring to a well recognised pattern the protest was not so much a unified event, as a conglomeration of events – in a similar vein to the ‘anti-globalisation’ movement of the 1990s and beyond.

In the sense of history repeating itself, Chris Knight, the ‘martyr’ of the G20 Meltdown movement, declared an impending “Velvet Revolution”[i] in the week running up the protest, and the media were quick to invoke parallels with the May Day riots and to label the assorted anarchists groups and hodgepodge of protestors as ‘anti-globalisation activists;’[ii] even in the absence of any anti-globalisation banners, chants or slogans. Needless to say, neither the revolution, nor the anti-globalisation protest materialised. Or in other words, the form of the protests might have stayed the same, but the content had not. Yet surveying the post-mortem commentary about the protest on the left, the blinkers still seem to be on those that only saw what they expected to see, nevermind what was simmering in a inarticulate bubble beneath the surface. END_OF_DOCUMENT_TOKEN_TO_BE_REPLACED

A piece by the Athens-based TPTG/Blaumachen taking a detailed look at the worker and youth protests which swept across Greece in December 2008.

Reflections on the recent unrest in Greece: “The rise of new organisational forms and contents of struggle is being discussed by all the insurgent elements”… 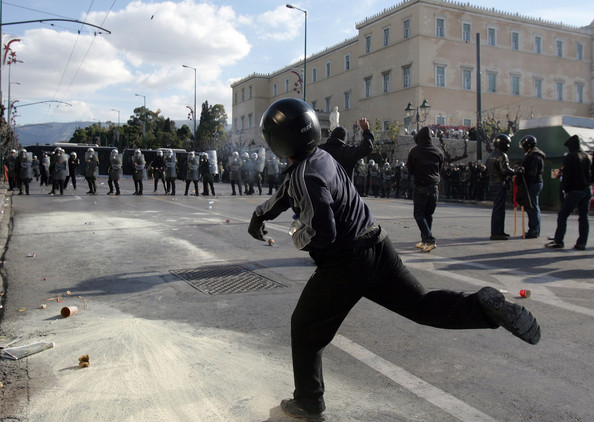 END_OF_DOCUMENT_TOKEN_TO_BE_REPLACED

On the wings of Seattle, the Zapatista rebellion in the Mexican state of Chiapas and other heights of the so-called “anti-globalisation” (or, more precisely, “alter-globalisation”) movement, by virtue of the failure of the bureaucratic path to socialism, the end of the last century and the beginning of the 21st century witnessed a growth in the popularity of “autonomism”, a more or less crystallised ideology according to which the successful struggle against capitalism presupposes turning one’s back on existing political institutions – the state, parties and elections, as if they will disappear if we ignore them.

In other words, many in Greece and the world nurtured the hope that it was possible not only to overthrow the Greek centre-right government, but also to tear down capitalism, although the anti-capitalist Greek parties – the semi-Stalinist Communist Party of Greece and the socialist coalition SYRIZA, despite very significant recent electoral advances – are far too weak to assume governmental power. But the autonomists do not want that since – despite the historical experience – they believe that there is a possibility of circumventing the existing political institutions and electoral strategy in developed multi-party systems. These are well-intentioned illusions. Even on Iceland, where the financial crisis and protests recently led to the downfall of the neo-con government, the power was taken over by the Social Democratic Party and the eco-socialist Left-Green Movement party. END_OF_DOCUMENT_TOKEN_TO_BE_REPLACED

Recently I have engaged in a fair degree of research into working-class resistance during the Second World War, and so at yesterday’s Anarchist Bookfair I was interested to pick up a copy of the Anarchist Federation’s pamphlet ‘Resistance to Nazism’ (subtitle ‘Shattered Armies: How the Working Class Fought Nazism and Fascism 1933-45’), reprinted this May.

The stated aim of the pamphlet is to present an alternative ‘history from below’ discussing the struggles and experiences of working-class people rather than looking at the world through the prism of competing governments and military figures. This is a worthy aim indeed. END_OF_DOCUMENT_TOKEN_TO_BE_REPLACED

today we added two new pieces to the ‘ideas‘ section of our website examining marx’s polemic with the anarchist bakunin.

‘bakunin’s expulsion from the first international‘ by paul b. smith and ‘marx and bakunin, then and now‘ by kevin michaels both look at the dispute in the international working men’s association, and focus on marx’s particular stress on working-class struggle rather than posing the debate as one of “centralism” versus “federalism”.