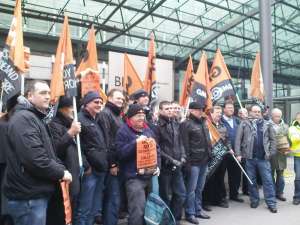 Meanwhile over at the Morning Star, the comrades were fuelling the flames of ‘working-class nationalism’ with a piece on yesterday’s demo over the Kraft-Cadbury deal. In true Communist Party of Britain tradition they almost seemed more concerned about standing up for the “historic British chocolate manufacturer” and “the national interest” than how to effectively resist redundancies.

However, at the construction workers’ demo today, all was not quite as we might have been led to believe… END_OF_DOCUMENT_TOKEN_TO_BE_REPLACED

The engineering construction workers’ strike has been the most significant instance of workers’ resistance to the recession and its effects so far. Its significance is not just to be found in that it was a strike taking place in a recession – when conventional wisdom suggest workers do not strike because of their weakened labour market position. Rather, its significance is to also be found in the militant and successful collective action which took place and the dynamics of this which were driven primarily by the grassroots. It threw up critical issues of workers’ collective leverage, how labour markets operate, xenophobia, neo-liberalism and state regulation of labour.

Redundancy notices were issued in late 2008 at Lindsey oil refinery for Shaws’ workforce after Shaws lost part of a Total contract at the site. Just before Christmas holiday, Shaws’ shop stewards were informed this work had been contracted to IREM, an Italian non-union company. Stewards explained to members that IREM would employ its own core (non-union) Portuguese and Italian workforce so the redundant workers would not be re-employed on the contract. This precipitated meetings with IREM to press the case for re-employment. Stewards were also told that IREM would pay the national rate for the job but this was met with suspicion.   END_OF_DOCUMENT_TOKEN_TO_BE_REPLACED

It is perhaps not surprising that the BBC and other mainstream media represented the Lindsey strikes in terms of nationalism, not class struggle. After all, the Corporation’s recent ‘White Season’ showed that, for the BBC, white British working class people are scared, vulnerable, and not a little xenophobic. The strikes – in overwhelmingly ‘white’ areas of the country, but involving many Irish and Polish workers – were therefore understood by journalists and editors unwilling to get to grips with details, as being simply against “the use of foreign workers” in inspiration. END_OF_DOCUMENT_TOKEN_TO_BE_REPLACED