The recent reinstatement of union convenor Rob Williams by his bosses at the Linamar car parts factory is a welcome victory for the Swansea workers, as well as all those who expressed their solidarity. Amongst the celebrations, however, caution is needed. Linamar are likely preparing a counter-attack, and this is just one front in a global war on car workers’ conditions.

Linamar sacked Williams on April 28th. According to the company, there had been an “irretrievable breakdown of trust”. END_OF_DOCUMENT_TOKEN_TO_BE_REPLACED

WORLDbytes has published this ten-minute film explaining the dispute at the Visteon car parts plants and featuring interviews with workers and their supporters at the Enfield branch on the final day of the factory occupation at that site.

END_OF_DOCUMENT_TOKEN_TO_BE_REPLACED

Since my first visit to the former Visteon factory in Enfield, North London, much has changed.  Following a threat to picket out the Bridgend engine plant, Ford has apparently conceded a full 52 weeks of redundancy pay – though, as we shall see, what has really been conceded is unclear.  Workers at the Enfield and Basildon factories voted to accept the ‘offer’ on 1st May, International Workers Day; one month after they had occupied the plant on April Fools.  On the day of my most recent visit (Sunday 3.5.09) we heard that Belfast had voted acceptance, in their case by 147-34. 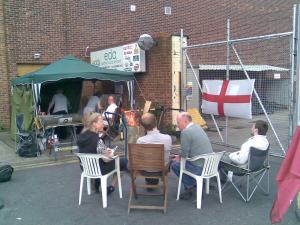 END_OF_DOCUMENT_TOKEN_TO_BE_REPLACED

The occupation was an inspiration for many – the spirit of the workers who refused to submit to being blatantly robbed by their bosses seemed to be what many had been waiting for, for far too long – the early possible signs of a resurgence of class struggle. Now that the occupation is ended without any clear victory in sight, some reflection is needed on the strengths and weaknesses of what has happened. It is always easy to be wise after the event, and necessary to be careful not to forget who initiated this struggle and took the risks. Any criticisms are as much of ourselves as supporters as of the occupiers. Still, we’ll never get very far in developing our struggles if we don’t reflect on where we went wrong and how we all might do things better next time. END_OF_DOCUMENT_TOKEN_TO_BE_REPLACED

At 2pm last Tuesday, 565 workers at three sites of Visteon, a car component manufacturer tied to Ford, were given six minutes notice of redundancy.  They did not get their last week’s pay, though it turned out that the Friday before around four or five hundred quid had been deposited in each of their accounts in place of redundancy pay.  The same night, Belfast workers occupied their factory demanding jobs or proper compensation.  And the next morning,1st April, appropriately just before midday, workers at Enfield standing around outside, waiting to collect their things, decided to seize the moment and take over their site too. A side door was either found open or broken down, and the occupation begun. END_OF_DOCUMENT_TOKEN_TO_BE_REPLACED

On Tuesday March 31st workers at Visteon factories – making car parts for Ford brands – across the UK were told that Visteon Corp could no longer prop up the UK branch, and so they would all lose their jobs with immediate effect. That night a hundred workers at a plant in west Belfast occupied their workplaces, and the next day were followed by their colleagues in Enfield (north London) and Basildon in Essex. We spoke to a number of the workers involved in the sit-in at Enfield, and have gathered some of the occupiers’ comments below.

“I’ve been working here for nineteen years. I’ve always been working for Ford and we were Ford workers, but in 2000 this place was farmed out to Visteon. At the time the union signed a deal with the chairman of Ford Motor Company to guarantee all Ford workers the same terms and conditions under Visteon. We had a contract with Ford. They’ve broken it. It’s disgusting. Can’t they see that we had a contract and we need them to stick to it? It was signed by the union – I was at first in the AEU, but now it’s Unite – and what we’re demanding is that Ford sticks by their side of the agreement. We don’t want any trouble – there’s been lots of redundancies before, down from around 1100 when I started to around 220 today – and it was always voluntary redundancies. But that doesn’t mean we’re going to say yes sir, thank you sir, and lie down and let them walk all over us. We’re staying until they honour their side of the deal”. END_OF_DOCUMENT_TOKEN_TO_BE_REPLACED