April 2010 saw the biggest conference ever for Labor Notes, the US-based rank and file trade union newsletter and network which celebrated its 30th birthday last year. Over 1200 activists gathered in the (unionised) hotel just outside Detroit where corporate blandness was set off by the T-shirted exuberance of American workers not shy of yelling a slogan or two – especially when workers on strike against a non-unionised branch of the same hotel chain came forward to tell a familiar story of rank injustice and betrayal. 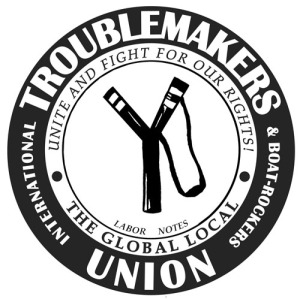 It’s impossible to take in everything at a Labor Notes conference (especially if you’re jet-lagged) but I followed my main interests in attending a chain of workshops addressed to union organising and membership participation (or lack of it). The first of these – “Innovative Organising Strategies” – was if anything the most inspiring, featuring the crucial dynamics of organising a union “before the union came along”, as some US activists have put it. END_OF_DOCUMENT_TOKEN_TO_BE_REPLACED

A Massachusetts local union president called it before the January 19 vote for senator: “I’ve never seen this much anger at the Democrats from union people,” said Jeff Crosby, president of a General Electric factory local near Boston, as he prepared a last-minute leaflet to hand out in the plant. “It’s worse than NAFTA.”

Top union leaders had bargained a compromise slowing down the health care benefits tax President Obama insisted on, but it was not enough to placate union members—and others—infuriated that Obama had broken his campaign promise not to tax benefits. END_OF_DOCUMENT_TOKEN_TO_BE_REPLACED