Mike Levine discusses how we can go beyond the hierarchical form of the National Health Service. The author has spent most of his working life as an NHS researcher.

While the National Health Service is remarkably successful in treating ill people, it is under threat of being opened up to international free markets. Both Labour and Tory/Lib Dem parties seem hell bent on this. The problem with private health providers is that they cannot make a profit out of treating any but the richer part of society unless they are subsidised.

The belief that a health service based upon market systems is more likely than a publicly planned one to lead to a decent healthy life for everyone, is completely unfounded. There is no evidence for it and comparison of the NHS with, say, the USA or European countries shows that Britain spends less in terms of a proportion of GDP for a service which is both good and equally available to everyone. END_OF_DOCUMENT_TOKEN_TO_BE_REPLACED

East London GP Jonathon Tomlinson continues our series on alternative ideas as to how public services should be run.

The Government’s intention to privatise the NHS continues unabated after a so-called pause and ‘listening exercise’.

Most importantly, the secretary of state for health’s duty – enshrined in the NHS since 1948 – ‘to provide and secure the effective provision of services’ has been delegated to an unaccountable quango called the NHS Commissioning Board. Entitlement to a comprehensive range of NHS services will no longer be guaranteed by government. 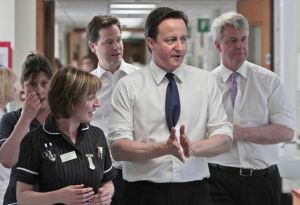 The other significant non-change after the pause is the role of competition which was widely reported to have been watered down, but emerges intact and probably even more central than before, with the Competition and Cooperation Panel (CCP) taking on the role of preventing anti-competitive behaviour. They have made it clear that they regard existing NHS hospitals as ‘vested interests’ and that competition is an unmitigated good. END_OF_DOCUMENT_TOKEN_TO_BE_REPLACED

The strike conducted at North Devon District Hospital on  5th-6th January has resulted in a victory for the UNISON members there. 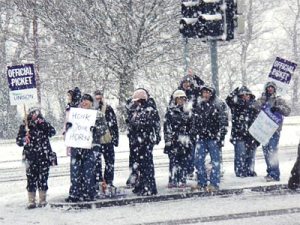 Amid plans for further strike action, the North Devon Healthcare NHS Trust and private contractor, Sodexo eventually gave in to our demands for NHS terms and conditions for the outsourced porters, cleaners and catering staff. This has resulted in 7 days extra annual leave, sick pay, NHS pay levels with increments, increased Maternity pay and back pay worth up to £3,600 for each member of staff. Though most staff will only move to band 1 of the pay structure which is still too low, the improvement is a significant step forward. END_OF_DOCUMENT_TOKEN_TO_BE_REPLACED 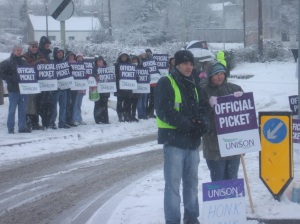 On 5th-6th January over 200 UNISON low paid porters, domestics and catering staff working for Sodexo took strike action.  This dispute arose after Sodexo and the North Devon Healthcare NHS Trust, which contracts Sodexo to provide hotel services, refused to honour a government agreement aimed at achieving NHS terms and conditions for these staff. In 2005 the Labour government had signed this agreement with NHS employers, private contractors and trade unions with the intention of bringing the two tier workforce within the NHS to an end by October 2006. NHS trusts were given a total of £75 million to pass on to private contractor “soft facility” staff working in hospitals. END_OF_DOCUMENT_TOKEN_TO_BE_REPLACED

Increasingly, however, the liberal center is beginning to voice concerns about where Obama is going. The headline of this article is based on an op-ed piece in The New York Times by Frank Rich titled “Is Obama Punking Us” in which he quotes a real estate broker from Virginia who voted for Obama, Chris Ann Cleland, as saying “I feel like I have been punked!” END_OF_DOCUMENT_TOKEN_TO_BE_REPLACED