This month’s editorial is written by Adam Ford and compares the workers that are winning, and those who are not 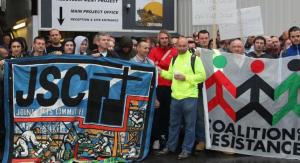 The wildly different trajectories of two recent industrial disputes provides us with an almost perfect lesson in both how they can be won and how they are generally lost. In both cases, the workers were members of the Unite union, as are around three million others in the UK, and in both cases the industry concerned was what might be called a ‘blue collar’ one. But one won, and is winning, while another lost badly. END_OF_DOCUMENT_TOKEN_TO_BE_REPLACED

If this year’s strikes are to have power, we must take our lead from the electricians, bypassing union attempts at defusion by offering each other solidarity in new ways and across artificial divides, writes Deb Harris. 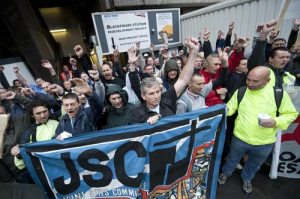 Solidarity is illegal. Thatcher said so. She only permits us to strike if we have a specific and identifiable common complaint – we are not allowed to strike together in recognition of the general horror. In 2011, submissive as ever, the unions found the only thing that the public sector can legally unite around – pensions – and conveniently forgot that everyone is angry about a lot more than that. Their speeches, placards and leaflets were all about pensions. As if we had given up on anything but retirement. END_OF_DOCUMENT_TOKEN_TO_BE_REPLACED

Adam Ford writes on an exciting development in electricians’ dispute as the ‘Sparks’ launched a wildcat strike against 35% pay cuts.

Hundreds of electricians took wildcat strike action on Wednesday, defying the bosses who want to slash their wages, the anti-union laws which the bosses use to pick holes in strike mandates, and the union bureacracy which had to be dragged kicking and screaming to holding a ballot at all. The country’s biggest ‘unofficial’ walkout in decades represents a new stage in the UK class war – a stage in which workers recognise the limitations of their own leaderships, and consciously move beyond them. By cutting out the utterly compromised middle men and women in this way, working people come face to face with their ultimate enemy – huge corporations and the capitalist state. 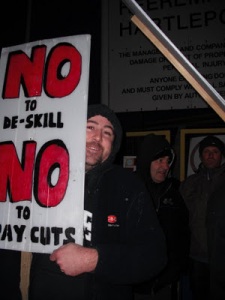 I’ve been reporting on the rank-and-file Sparks movement since early autumn, when electricians angry at proposed pay cuts of 35% started their own rank-and-file organisation, with the aim of pressurising union tops into leading a struggle for their members’ livelihoods. Instead, as the Sparks’ resistance increased, so did the machinations of the bureaucracy. As early as September, negotiator Bernard McAulay was slandering the workers as “cancerous”, but he gradually wormed himself back into a position of influence. END_OF_DOCUMENT_TOKEN_TO_BE_REPLACED

Adam Ford writes on the latest turn in the electricians’ struggle

The grassroots ‘Sparks’ movement of electricians continues to organise direct actions and protests across the country, but it is running out of time before construction companies impose huge pay cuts. Meanwhile, the same Unite bureaucracy whose negotiator Bernard McAulay labelled the Sparks “cancerous” is seeking to gain control of the struggle, the better to strangle it. The rank-and-file workers need to develop a resistance strategy, and fast. 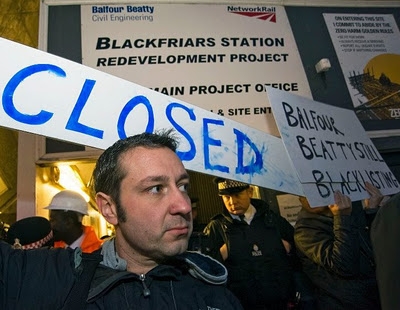 The dispute began back in August, when electricians angry about the proposed new Building Engineering Services National Agreement (BESNA) set up their own rank-and-file campaign committee, with the intention of pressurising Unite tops into adopting a more combative stance than usual. Non-unionised workers were urged to join Unite, with the idea being that they would be able to vote for official strike action. Since then, the national and local committees have organised various wildcat actions, such as brief site ‘occupations’ and road blockages. This momentum has built week on week. END_OF_DOCUMENT_TOKEN_TO_BE_REPLACED

Today at 7.30 am hundreds of electricians briefly occupied a building site in protest at attempts to cut their pay and conditions. 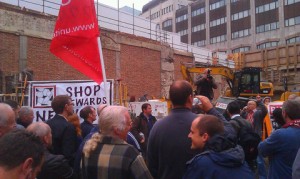 The conflict is because the “Big 8” of construction employers want to withdraw from the JIB (Joint Industry Board) agreement on pay, grading and seniority. They want to bring in new grades of semi­skilled electricians earning £10.50 and £14 an hour instead of the current hourly JIB rate of £16.25.  The protests against this change have been going on for several weeks now all across the country. Last week at the Olympic site workers blocked the site entrance for some time but, as the site is so huge, the management just moved people coming in to work to a different gate, so the protesters blocked the main road near the site for twenty minutes. The demo today was bigger, maybe 250- 300 people, and started out next to Farringdon Station. END_OF_DOCUMENT_TOKEN_TO_BE_REPLACED