The General Election results on 6th May came as somewhat of a surprise. This did not lie in the failure of the Tories to win an overall majority; the Lib-Dems inability to make their much-heralded breakthrough; the collapse of the SNP surge; nor even in New Labour making a limited recovery, especially in their London, Scottish and northern English heartlands. What was surprising to most was the increased level of voter participation, especially after the mounting anger and public disgust over Westminster sleaze. 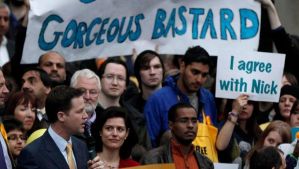 Can the increase in electoral participation be put down to the wider interest created by televised debates between the three main party leaders? Quite clearly, despite all the media hype, especially around the ‘Clegg phenomenon’, the final division of votes, between the mainstream parties, bore little relationship to the initial opinion polls. END_OF_DOCUMENT_TOKEN_TO_BE_REPLACED

The most striking feature of British politics over the last decade has to be the disenfranchisement of the working class. The working class has little or no voice at national, regional or local level. Our task is to be part of the reversal of this situation. But this reversal has to come from below, from the linking and networking of the campaigns and struggles of the working class itself.

Unfortunately the organised left does not see it this way. As convinced vanguardists and elitists they see themselves as providing the leadership with all the answers that the workers must follow. They have had a decade in which to show leadership, but have failed dismally to build a broad united movement to fill the vacuum to the left of New Labour.

END_OF_DOCUMENT_TOKEN_TO_BE_REPLACED

See here and here for leaflets from the campaign

The SWP’s call for Left Unity for the 2010 General Election should come with a “serious health warning” attached to it.  On February 5th 2005 the SWP used its majority to close down the Socialist Alliance, which involved a number of different Left groups and individuals.  They closed it down to establish their own, more loyal front organisation, Respect.  And we all know what happened to Respect!

At the same time the SWP helped to organise the demoralising split in the SSP (Scottish Socialist Party).  They had “a platform” inside the SSP and encouraged Tommy Sheridan to break the broad and brave alliance of the SSP.  Why? Because the SWP cannot stand rival organisations. END_OF_DOCUMENT_TOKEN_TO_BE_REPLACED

In the absence of major class struggles in the UK, the European elections provide us with a snapshot view of the current state of politics. The following analysis looks at the election results in Europe, the UK & Ireland and, in a bit more detail, in Scotland, in order to identify some significant political trends. END_OF_DOCUMENT_TOKEN_TO_BE_REPLACED