From the Moroccan coast to Poland, from Cyprus to The Canaries, every day thousands of people attempt to abandon their countries of origin and reach the European continent. The whole way along their route they are confronted with the same repressive strategy: the same barriers and persecution, the same racism and violence. 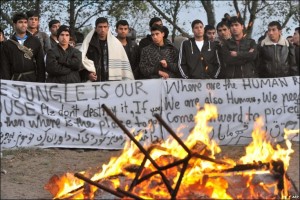 One might think that these people who cross oceans, deserts and mountains, hostile territories and foreign countries, are victims of misunderstandings or police excesses: but this is not the case. The immigrants who try and reach Europe are held back by practices, objectives and measures ingrained at the very heart of European institutions and approved by individuals elected by European citizens. They are confronted with a type of inhumane violence and repression which we would tend to associate with dictatorial states, but all this has been decided “democratically”. END_OF_DOCUMENT_TOKEN_TO_BE_REPLACED