One cannot help but contrast the current, powerful student movement in Québec, Canada, to its counterpart in the UK. It was considered a big deal when in November 2010 we had roughly 100,000 (who came from around the country) on the streets of London, whose population proper is roughly 8 million. In comparison, 200,000 turned out for recent protests in Montréal, whose population proper is roughly 1.6 million (and only 3 million in the wider urban area).

Both events were provoked by a hiking of tuition fees – in the UK a 200% increase to a whopping £9,000 a year, in Québec a 75% increase to £2,400 a year. This is not to mention Québec’s tuition fees were, and with the increase, are still lower than the North American average. This is in contrast to the UK, whose fees of £3,000, before the trebling, were already much higher than the European average. END_OF_DOCUMENT_TOKEN_TO_BE_REPLACED

With the 9th November national demonstration rapidly approaching, apprehensions over the state of the ‘student movement’ naturally arise. To be sure, the planned march against fees, cuts, abolition of the Education Maintenance Allowance, and the marketisation and privatisation of Higher Education will surely be the best measure of last year’s student mobilisations.

The merits of a movement can only be judged in secondary terms by parliamentary manoeuvres, i.e. whether a particular bill passes or falls, a minister resigns or is promoted, etc. As libertarians we should understand that the true strength of a social movement is in its breadth (composition) and its sustainability (spanning multiple episodes of struggle): these qualities both feed and are fed by its potential to affect consciousness at large. END_OF_DOCUMENT_TOKEN_TO_BE_REPLACED

Public meeting on the student movement, hosted by the London Commune. From 7pm on Thursday 10th (the day after the NCAFC demo)

Last winter saw massive protests against the rise in tuition fees and cuts to EMA. We had the amazing riot at Millbank Tory HQ, school and college students marched and there were campus occupations and direct action up and down the country. But even all of this wasn’t enough to win.

The Lib Dems were wounded, the left groups picked up some new members, thousands of us could feel what solidarity means. But still students today face a harder position than ever. The cutters and privatisers are still on the offensive. END_OF_DOCUMENT_TOKEN_TO_BE_REPLACED

Joe Thorne spoke to a student at Leeds City College who has been involved in the protests around education cuts and in the new Really Open Student Union.  The interview is followed by statements from a number of other young people, some of which are featured in this bulletin which you can print off and distribute to support students walking out on Wednesday.

How are the cuts going to affect you?

I’m worrying about my future.  I don’t know if I can stay in college.  This has cancelled out my hope of going to uni.  I’m living with my parents.  They’re both disabled and we’re living off disability allowance.  I don’t know how we’re going to get through the next few years, and bills are going up, especially electricity and gas. END_OF_DOCUMENT_TOKEN_TO_BE_REPLACED

The following leaked document had disappeared from the public domain due to the website which it was previously hosted on going down.  It is a briefing for heads of university administrations on dealing with student occupations.  It may assist activists in gaining some idea of the perspective of senior university officials on occupations – although some of the material is more specifically about occupations around Palestinian issue.

Original introductory note by an ‘Education Not for Sale’ activist

What follows is a briefing published by university administrators concerning student occupations . It outlines some of the tactics used by university authorities to deal with student protest, specifically occupations. It is not clear exactly who wrote the briefing, or who received it, but since it is addressed to members of the Association for Heads of University Administration (AHUA), we can reasonably assume that it has been received by a number of vice chancellors and others in positions of authority around the country. END_OF_DOCUMENT_TOKEN_TO_BE_REPLACED

What has been taken from them to make them so angry? Hope, that’s what. Hope, and the fragile bubble of social aspiration that sustained us through decades of mounting inequality; hope and the belief that if we worked hard and did as we were told and bought the right things, some of us at least would get the good jobs and safe places to live that we’d been promised.

A single image from a day of movement marks out competing visions of hope. A boot through a Millbank window fed the dreams of resistance that many in the Left have been craving since talk of austerity started. The same boot posed a question that plays out in the university occupations that preceded it and have since blossomed in its wake: what is it exactly that we are hoping for? END_OF_DOCUMENT_TOKEN_TO_BE_REPLACED

by a participant in the Parliament Square demonstrations

The condemnations are as predictable as they are boring.  The public-school educated Sun hacks, who write like some coked up parodies of proletarian semi-literacy, refer to “louts” and “hooligans”.  The Daily Mail complains about someone urinating against Churchill’s statue, and the Telegraph is dismayed that Prince Charles and the Duchess of Cornwall were “attacked”.  Probably by a “baying mob”.  Meanwhile, someone in a moustache on The Guardian talks about how, no doubt, this will provide a “distraction” from the “real issues”, whose repetition ad nauseam presumably has some intrinsic value for the solemn liberal contingent.

I can’t even be bothered to look up the precise terms of the condemnation this time.  It’s always the same.  A dash of the royal family, veneration for some long dead racist, shakes of the head from the banal but well intentioned.  Is anyone still listening?  Haven’t we read all this before? END_OF_DOCUMENT_TOKEN_TO_BE_REPLACED

Today is the fourth major day of action against the government’s attack on education.

Much about this movement has been new and original, and that can only be a good thing. The aspiring politicians who lead NUS have been swept aside.

We have stood up for ourselves in spite of media condemnation. The protests and occupations have benefited from being lively and spontaneous. While suited NUS leaders wanted to debate politicians on friendly terms in TV studios, the movement has shown real militancy and anger at this government of millionaires trying to screw us over. END_OF_DOCUMENT_TOKEN_TO_BE_REPLACED

David Broder writes on this week’s student protests in London

Tuesday 30th saw the latest major student protest against the planned attacks on further and higher education, the ConDem coalition planning to cut Education Maintenance Allowance and raise fees to as much as £9,000 a year. END_OF_DOCUMENT_TOKEN_TO_BE_REPLACED

This academic year, an ever-increasing number of students are seeing budget cuts at their university translate into sacked staff and lecturers, cutbacks of university support services such as counseling, whole departments threatened with closure and the like.

However with this has come a burgeoning anti-cuts movement across the country, with many new campaigns set up on individual campuses. END_OF_DOCUMENT_TOKEN_TO_BE_REPLACED

A statement by students at the university occupation in Vienna. See here for an interview with one of the activists involved. This document was published early in the struggle but is only newly available in English.

The strike signifies the refusal of work, but in this case it means an enormous intensity of labour. For more than a week people have been organizing, coordinating, communicating, writing, filming, photographing, cooking, doing media work and much more. END_OF_DOCUMENT_TOKEN_TO_BE_REPLACED

Nathan Coombs interviews a participant in the university occupation movement in Vienna, Austria. See here for his previous article ‘The battle for free education begins’, featuring a video on one of the occupations.

Why did you decide to occupy? How and when did you occupy the building, and why did you choose the particular space that you did?

After years of exhausting fights between students, teachers and the rectorate there was evidently great discontent. One of the main reasons for this was a successive undemocratisation of the academy of fine arts going along with a structural empowerment of the rector. Even the election of the rector caused significant resentment and was followed by a state ruling that Clementine Deliss, who applied for the rector’s job, was sexually discriminated against, as she was not chosen although she had been the only candidate with a broad popularity amongst students, teachers and the senate. END_OF_DOCUMENT_TOKEN_TO_BE_REPLACED

Students at the University of California, Santa Cruz (UCSC) have begun an occupation in protest at the slashing of services and jobs in the state. The current economic crisis has given the state government reason to carry out an ideological war on public services, and the occupation intends to resist such attacks: however, students are also engaged in a more thoroughgoing critique of how education is organised. One example of this is the recently published ‘Communiqué from an Absent Future‘, calling for such occupations, which we reproduce below. 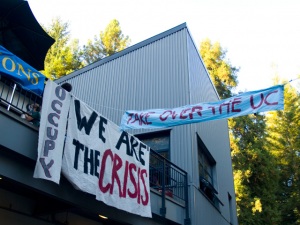 Like the society to which it has played the faithful servant, the university is bankrupt. This bankruptcy is not only financial. It is the index of a more fundamental insolvency, one both political and economic, which has been a long time in the making. No one knows what the university is for anymore. We feel this intuitively. Gone is the old project of creating a cultured and educated citizenry; gone, too, the special advantage the degree-holder once held on the job market. These are now fantasies, spectral residues that cling to the poorly maintained halls. END_OF_DOCUMENT_TOKEN_TO_BE_REPLACED

Even for those well used to the low standards and dirty tricks of private contractor ISS and the UK Border Agency (UKBA), the brutal immigration raid on cleaners at the School for Oriental and African Studies (SOAS) in London last month came as a shock. It sparked a protest movement and occupation which – for 48 hours at least – constituted a significant show of strength against the university management and promised to win real concessions from those directly involved in the shameful intimidation of workers who – the timing was not coincidental – had only recently won union recognition and the London living wage.

That SOAS Director Paul Webley eventually managed to get his office, the Directorate and two conference rooms back without having made any real concessions proved a disappointment for many involved in the action. As activists continue to assess ‘what went wrong’, and rue an opportunity missed, it remains to be seen whether future gains made by the ongoing campaign will vindicate the strategy of those who wanted to end the occupation early. END_OF_DOCUMENT_TOKEN_TO_BE_REPLACED