We got notice of the 10th of May strike on a Friday afternoon ten days before, in the middle of an emergency meeting about redundancies. The first response was “They have got to be fucking kidding.” There was a general expression of dismay and disbelief. So what is the problem? Why weren’t we pleased about being called out? END_OF_DOCUMENT_TOKEN_TO_BE_REPLACED

All teachers are in the University and College Union. Support staff/admin staff are mainly in Unison or no union. UCU has always been strong in the college and in the two years before the strike successfully campaigned to make 60 hourly paid teachers into permanent employees with higher pay and more rights. UCU also led an unofficial walkout earlier in the year to support our longstanding caretaker who was sacked. END_OF_DOCUMENT_TOKEN_TO_BE_REPLACED

However, the strike remains strong.  Picket lines are always welcoming, receptive, and worth a visit.  (Locations and other ideas for how you can help on our previous report.)  The strike fund stands at an impressive £25,000, though with 250 striker in their fourth week without work to support, it does need to be augmented.  The strike has a number of positive features which the whole movement can learn from: END_OF_DOCUMENT_TOKEN_TO_BE_REPLACED

Teachers at Tower Hamlets college are now in their third week of indefinite strike action against cuts to jobs and courses.  Indefinite strike action (rare in the UK), the level of commitment and creativity shown by the strikers, and the wider social objectives of the struggle make it a crucial battle for us to support. 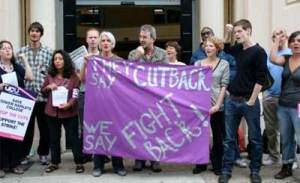 Visitors are welcome at picket lines outside the college’s three sites, from 7.30am each morning (though showing up at any time will be appreciated, and a list of other ways to help appears at the bottom):

END_OF_DOCUMENT_TOKEN_TO_BE_REPLACED

Friday 12 June saw hundreds of English for Speakers of Other Languages (ESOL) students, staff and supporters march in East London in protest at major cuts to ESOL announced at Tower Hamlets College. 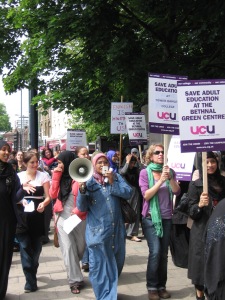 END_OF_DOCUMENT_TOKEN_TO_BE_REPLACED

At 4pm on the afternoon of Monday 11th May around thirty students began an occupation of the sixth floor canteen at the London Met building on Commercial Road in protest at sweeping cuts. Management plan to get rid of 550 posts – some 800 members of staff, one quarter of the indebted university – which will mean severe cutbacks in several subjects, such as the arts and languages.

UCU members had staged strike action last Thursday (7th May) and although taken by surprise by the student action, several lecturers have joined the occupation. As yet management have refused to talk to the occupiers, but there seems to be strong solidarity between students, lecturers and other staff organised by UNISON, with course cuts and reduced student services the obvious outcome of attacks on the university workforce.

The nursery, key to allowing students with kids to attend London Met, as well as all but two of the libraries are also due to be slashed in order to make up for a purported £15 million budget deficit. END_OF_DOCUMENT_TOKEN_TO_BE_REPLACED