Daniel Harvey gives a short personal reflection on the riots.

There exists in England an underclass that does not exist anywhere else in Europe. White, little educated, without any means of social evolution, they are a perfect example of the results of Anglo-Saxon capitalism and its dehumanising program. The English perversion is to make this population proud of their misery and their ignorance. The situation is hopeless. I’ve more hope for the youth of our banlieues. 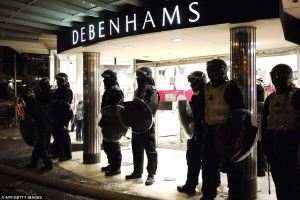 Someone turned to me this morning and said he thought there was something strange about this country, in the way there has always been this underclass that most other countries in Europe have avoided. I replied about the trouble a few years ago in the banlieues of Paris, but his point was still a true one.  These countries put out this sickly image of sophistication, haute cuisine, high culture, civilised values, tea, and intellectualism, yet in both places the obscene underside erupts to reveal itself to everyone. END_OF_DOCUMENT_TOKEN_TO_BE_REPLACED