A meeting of the Birkbeck discussion group*, with a lead-off by David Broder.  From 7:30pm on Thursday 14th April at Room 254, Birkbeck, Malet Street (Goodge St. tube). All welcome. 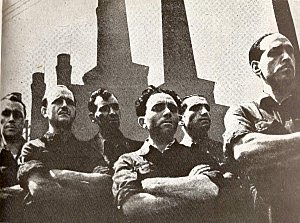 The Second World War was the greatest crisis in the history of capitalism. For six years the system of states was in chaos as rival
imperialisms fought each other for control. Many communists hoped that the disaster of war and the discrediting of the ruling class would provide an opportunity for revolution. Yet the democratic bourgeoisie  emerged from 1945 stronger than ever.

END_OF_DOCUMENT_TOKEN_TO_BE_REPLACED

The recent collapse of dictatorships in Egypt and Tunisia marked inspiring victories for the mass uprisings in the Arab world. However, these revolts have again posed an age-old question of revolutionary politics: is the aim to get rid of this or that leader, or to overthrow the system as such?

This question was sharply posed in the late World War II period when mass resistance movements besieged fascist régimes across Europe. These movements were dominated by activists who believed in the desirability of communism.

But as such, the maintenance of capitalist order after the war was a major defeat. Why did resistance not mean revolution? Here I shall focus on the examples of France and Italy. END_OF_DOCUMENT_TOKEN_TO_BE_REPLACED

The ideological breakdown of the left and extreme left at the time cannot be explained if we forget the fate of the hundreds of thousands of ‘shipwrecked’. Last in a series by João Bernardo: see here for parts one, two and three. Translated by Carlos Ferrão.

As odd as it may seem, after all I have discussed in the previous articles, in the last days of the Second World War there were still those who dreamed of revolution. END_OF_DOCUMENT_TOKEN_TO_BE_REPLACED

“Save one million Jews! And to do what with them? Where will we put them?” Third in a series by João Bernardo: see here for parts one and two.

I mentioned in the previous article that, during the time of the German-Soviet Pact, the Polish Jews that managed to escape from the Nazi-occupied areas of Poland to the areas occupied by the Red Army were deported or put in concentration camps, a sad fate, but at least they were accepted and nobody ever sent them back across the border. Far more sinister was the UK’s and the USA’s attitude. END_OF_DOCUMENT_TOKEN_TO_BE_REPLACED

Knowing how to fight one enemy means knowing how to fight another: this sentiment underlay the Stalinist politburo’s attitude towards refugees from the fascist countries. Second in  a series by João Bernardo: see here for part one.

Why did those who fled from fascism, only to end up in the democratic countries’ prisons, not seek exile in the Soviet Union? Moreover, what happened to the people who did go to there, the country of the October revolution and the socialist fatherland? END_OF_DOCUMENT_TOKEN_TO_BE_REPLACED

The refugees who tried to save themselves by crossing the frontiers: hated by the fascists for being communists, hated by the Nazis for being Jews, and hated by the democracies for their being anti-capitalists. By João Bernardo.

In the early days of July 1940, off the Irish coast, a German submarine attacked and sank a ship carrying around 1200 civilian passengers. More than half died, not least because the ship did not have enough lifeboats. END_OF_DOCUMENT_TOKEN_TO_BE_REPLACED