Seven years ago, a bloody coup sponsored by the CIA and elements nostalgic the monstrous Duvalier dictatorship, and fulfilled by paramilitary thugs linked to the old armed forces, toppled president Jean Bertrand Aristide. That moment started an ongoing military occupation in the country, first by French, Canadian, Chilean and (of course) US troops. The latter kidnapped Aristide, who was no revolutionary, but advocated a number of minimal reforms that were unbearable for both the US and the Haitian elite, and so they put him on a plane to the Central African Republic on 29th February 2004.

Then, in June, the military occupation was handed to a UN force, the MINUSTAH, which is led by Brazil and composed almost entirely by Latin American armed forces, as well as other “freedom-loving” armies such as that of Sri Lanka, Nepal, Angola, Morocco, etc. 10,000 died as a direct result of this act of international gangsterism. END_OF_DOCUMENT_TOKEN_TO_BE_REPLACED

Whilst Blair’s stance is clearly a self-serving attempt at justification for the barbarism that was unleashed on Iraq, the broader argument that Western troops can sometimes be a force for good does have currency for some on the left. END_OF_DOCUMENT_TOKEN_TO_BE_REPLACED

For us, the Haitian people, the earthquake in Port au Prince, on 12 January 2010 hurt deeply. In fact, apart from the destruction of the public buildings most of our neighbourhoods were destroyed. Not surprisingly they are the most fragile and the most unstable: the state never gave them any service, any attention or helped them consolidate. On the contrary, we need to be able to move, so we have neither time nor capacity to be able to consolidate our position from being precarious.

Meanwhile some capitalists are trying to force the workers back to work in damaged factories, owners of large businesses are opposed to distributing their goods and sell them at a high price, the state proves again, as always, by its absence, its incapacity and incompetence (the only thing they do is steal and maneuver, supporting the landlords, the bourgeois and the multinationals), the national police are absent (they only know how to repress the people) and the imperialist forces are clearly taking advantage of the aid they give. They intend to establish a clear and definitive control over factory workers, workers of all kinds and the suffering masses in general, who are extremely dependent, with this disastrous situation. END_OF_DOCUMENT_TOKEN_TO_BE_REPLACED 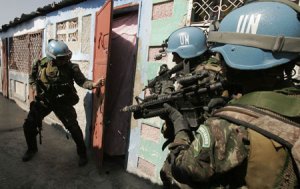 Of course, no-one mentions the two-hundred-year sentence capitalism and imperialism imposed on the Haitian people for having carried out the only successful slaves’ social revolution in history. Still less do they tell us about recent events, like the significant workers’, students’ and peasants’ struggles against colonial occupation and Preval’s puppet government which developed in 2009. END_OF_DOCUMENT_TOKEN_TO_BE_REPLACED

Although UN troops have been occupying the country for six years, the USA has decided to engage in a second invasion of its own, without even going through the farce of “consulting” previous occupiers. END_OF_DOCUMENT_TOKEN_TO_BE_REPLACED