See here for a full list of RMT picket times and locations – go down and visit from 22:00 Monday night or Tuesday morning!

Many of us will have been defending the tube strikes that begin on Monday evening, and continue – amongst different groups of workers – until the end of Tuesday to friends and fellow workers.  Many will be grumpy about their journey being disrupted; susceptible to TFL and government propaganda; and – perhaps without admitting it – somewhat jealous of the leverage, organisation, and (at least what they imagine to be) the superior terms and conditions of RMT members.  RMT General Secretary Bob Crow may be a figure of particular annoyance. END_OF_DOCUMENT_TOKEN_TO_BE_REPLACED

Once again it is nearly a year since we should have had a pay rise. It has been settled after a protracted campaign led industrially by the RMT while the other unions maintained a deafening silence (apart from a certain union leader who encouraged his members to scab in the summer). END_OF_DOCUMENT_TOKEN_TO_BE_REPLACED 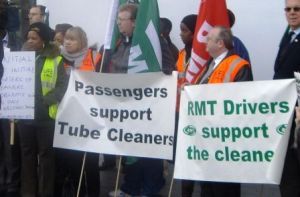 The cleaning contract on London Underground’s Bakerloo, Victoria and Central Lines is set to be renegotiated and a new company is expected to grab it. It is likely to demand new (and worse) conditions and will trawl again through workers’ immigration status.Cleaners, many of them migrant workers, are sick of being handed around from company to company, and continually facing poor pay and conditions. Their RMT union has called a protest in their support at the headquarters of Metronet—which is responsible for the contract. END_OF_DOCUMENT_TOKEN_TO_BE_REPLACED

It’s early November and the view from the 23rd floor offices of Euston Tower must be one of the best in London. Low clouds obscure the top of the adjacent Post Office Tower but the “belly of the beast” – the City of London – is clearly visible in the distance; a constant reminder of the reason we are here at ACAS, deadlocked over pay. 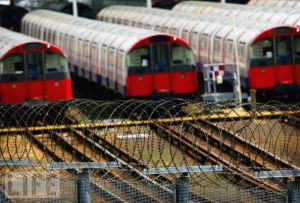 The global financial crisis has had enormous repercussions for working people in all walks of life, in both the private and public sectors.

Even the Underground, which in recent years has tended to be insulated from the worst problems due to massive government investment, is feeling the pinch. And it’s the workers at the bottom who are being pinched hardest. This time, more than any other, it’s important that the transport unions stick together to fight management. END_OF_DOCUMENT_TOKEN_TO_BE_REPLACED

London’s Camden Centre was packed to the rafters on Saturday for the RMT conference on working-class political representation. The enthusiasm of its participants was, lamentably, much at odds with the dire initiative likely to be spawned by the event. 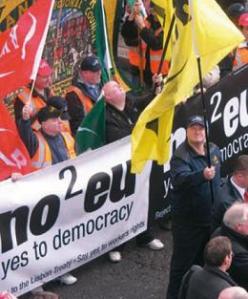 While RMT has conference policy to convene workers’ representation committees across the country to select candidates, this event, like a similar one in February, was a mere rally for the follow-up to the No2EU European election campaign. There were no resolutions or votes; there was minimal debate and no-one who had opposed or criticised No2EU was allowed to speak. As with the June election’s initiative, it seems that a small clique in the union around Bob Crow and Pat Sikorski, along with allies in the leadership of the Morning Star/Communist Party of Britain and the Socialist Party, will set the agenda for a General Election coalition. END_OF_DOCUMENT_TOKEN_TO_BE_REPLACED

Ahead of today’s RMT conference on political representation, Steve Freeman responds to our very critical coverage of its “No2EU: yes to democracy” initiative. 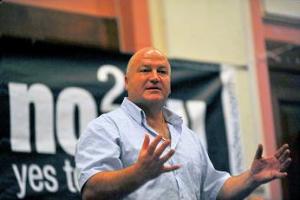 The Rail Maritime and Transport Union has fought the bosses. It has taken industrial action many times. It has opposed the policies of New Labour. The union has built a reputation as a fighting union. At the last European election the RMT entered the fray taking the fight into the political arena. The RMT opposed the pro-capitalist EU and the main capitalist parties, Labour, Tories and Lib Dems. It provided a militant working class alternative to the BNP. END_OF_DOCUMENT_TOKEN_TO_BE_REPLACED

With the slogan “your cleaners are being swept out”, cleaners from London’s bus depots gathered at lunchtime on Wednesday outside City Hall with supporters including Jeremy Corbyn MP, to hand in a petition asking the Mayor and Transport for London to reverse a decision not to renew the cleaning contract for the daytime, which will leave day cleaners at 18 depots jobless from Friday. The cleaners, who work for Dougland Support Service Ltd, are from many countries and received support not only from the MP but also London Region RMT, the Latin American Workers Association and London Coalition Against Poverty. Night cleaners also expressed their support, knowing that they will bear the brunt of the extra workload caused by the sacking of the day cleaners. 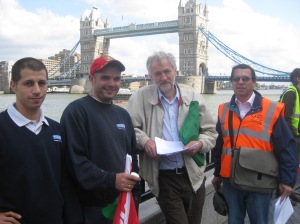 The petition, in the name of the London bus cleaners committee, was accompanied by the letter reproduced below, and received widespread support from drivers across the unions. END_OF_DOCUMENT_TOKEN_TO_BE_REPLACED

On Friday the 18th of September cleaners at all bus stations will lose their jobs because TFL put profit first leaving the stations and buses dirty, affecting the health and safety of the bus drivers and the public, leaving 18 cleaners their children and families without jobs to support them.

Is this what you want to see at your bus station?

This situation affects every bus user. We are appealing to all Londoners to support our campaign and not to let this injustice happen. END_OF_DOCUMENT_TOKEN_TO_BE_REPLACED

It was an oddly relaxed mid-afternoon on the seventh day of the Vestas wind turbine factory occupation yesterday [Tuesday 27th July], as demonstrators in the roundabout solidarity camp listened to a couple of musicians in the Isle of Wight sunshine. 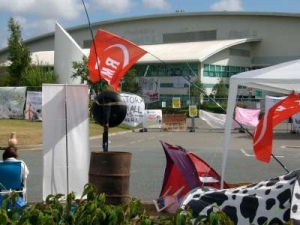 With Vestas going to court on Wednesday in an attempt to get legal backing for an eviction, it was very much a case of the calm before the storm. In the meantime there was apparently little for people to do except lounge around in their tents, and occasionally shout their support to the occupiers when they came out on the balcony. END_OF_DOCUMENT_TOKEN_TO_BE_REPLACED

‘England fans hit strikers for six’ declared a headline in The Sun referring to the fact that the inconvenience attendees suffered getting to Wembley due to the tube strike did little to impact upon attendance, or dampen enthusiasm about, England’s 6-0 victory over Andorra. Revelling in this, The Sun published pictures of England fans holding up signs declaring that Bob Crow, RMT general secretary and organiser of the tube strikes, ‘is a ******’ (1).

The public response to the two-day strike across London’s tube network in mid-June has largely been a reaction to their immediate experiences, rather than one of solidarity with the striking workers. In many ways, as one commentator has observed, the reaction was not particularly different to the reaction to the heavy snow that brought the London transport network to a halt earlier in the year (2). END_OF_DOCUMENT_TOKEN_TO_BE_REPLACED

We write in reply to your Open Letter to the Left of 9 June, on behalf of The Commune (www.thecommune.co.uk), a small, relatively new group, which stands for communism from below and workers’ self-management.  We publish a monthly paper of the same name and are mostly active in London, though we have comrades across England and Wales.

We welcome the spirit of the Open Letter, and would be interested to participate in discussions concerning left unity in general, or a conference in particular.  Of course, you will understand, we have concerns – we are sure you do too.

We want to be sure that the lessons of the Socialist Alliance and Respect have been learnt.  In particular, we want to know what has changed – and it cannot be simply this or that personality – since packing meetings with raw recruits to block vote against independents and other groups was considered an acceptable tactic during the days of the Socialist Alliance.  And we want to know what has changed since the Socialist Alliance was wound down at your behest, in favour of the Respect project.  You cannot, after all, expect those of us who were involved last time to go through such disappointment again; to be shut out, or to have a project we have built tossed aside when the leading faction finds something more interesting to do.  If your perspectives have changed, we can accept that: but we need to be convinced of it. END_OF_DOCUMENT_TOKEN_TO_BE_REPLACED

Many Londoners have been fuming about the extra hours its taken them to get into work and back home since RMT members on the tube went on strike at 7pm on Tuesday. Unfortunately, some have taken to blaming the RMT, understandable given the vicious propaganda carried out by Boris Johnson, Transport for London, and the likes of the Evening Standard. However, as socialists, we need to point out that the line we get spun by the bosses is rarely the whole truth (or even the truth at all).  For this reason, this video explanation by RMT General Secretary Bob Crow of what really happened in the negotiations – the truth about ‘the demand for a 5% raise’ and redundancies – is useful for us.  Crow invites the bosses to sue him for slander or libel if what he says is untrue.

END_OF_DOCUMENT_TOKEN_TO_BE_REPLACED 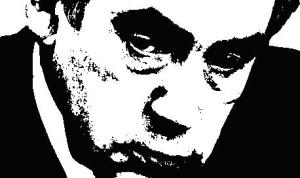 The last week’s European elections saw huge losses for Europe’s mainstream labour and social-democrat parties, with the Party of European Socialists losing 54 seats to fall to 163 MEPs as it captured a lower-than-ever share of the vote.

The National Union of Rail Maritime and Transport Workers (RMT) have called a 48-hour strike forJune 9th to 11th on the London Underground and Transport for London after workers voted by a huge majority to take action over pay, jobs and justice.

Transport for London is cutting 1,000 jobs, tearing up previous agreements on no compulsory redundancies. TfL are trying to impose a five year pay deal starting with a derisory 1% and for 2009 and RPI+0.5% for the next four years. This amounts to nothing more than a pay cut year after year, they refuse even to consider the RMT’s one year pay claim. Across the London Underground management have been engaged in a campaign of bullying and harassment of staff, ignoring established procedures on discipline and attendance. All this amounts to a premeditated bosses offensive against the RMT, the largest union of rail workers. The conduct of management has been nothing other than a provocation, the Tories want a fight – they have even brought in a union busting firm of consultants from The Burke Group.

This dispute is the first round of a fight with a Tory Party intent on carrying out wide scale cuts in the public sector. Whilst some sections of our movement are currently obsessed by the events of the Westminster Village they need to wake up to the reality of what is at stake in this dispute – if the strongest section of the trade union movement, both politically and industrially, suffers a defeat it will be a set back for the entire movement. END_OF_DOCUMENT_TOKEN_TO_BE_REPLACED