As women footballers were getting ready to unofficially kick off the London Olympics, the Public and Commercial Services (PCS) union general secretary was preparing to bow to ruling class pressure, and call off a strike of workers in the Border Agency, Criminal Records Bureau, and the Identity and Passport Service. In doing so, darling of the fake left Mark Serwotka was setting the seal on years of collaboration between union officialdom and the London Olympics authorities.

Tomorrow’s aborted strike was originally called as part of a dispute over 8,500 Home Office jobs the PCS say are at risk as a result of government cuts. Had the walkout gone ahead, it would have caused some disruption to last minute Olympics preparations, particularly with spectators, athletes and others in their entourages still arriving in the country.

Serwotka faced a storm of pressure from the right wing abuse over the strike, with the usual papers seizing on the opportunity to bash the supposed “arrogance” of workers choosing to withdraw their labour at a time when it might have most impact. As could be anticipated, the media ‘debate’ weighed heavily on the ‘national pride’ side of the Olympics, and against working class consciousness. END_OF_DOCUMENT_TOKEN_TO_BE_REPLACED

There used to be over 50 workers at the Remploy factory in Preston, now reduced to only 18, each of them was out on the picket line for the second day of their national strike, 100% turn outs were also reported at Heywood and Wigan. Support came from BAE and Rolls-Royce workers as well as teachers, passing council refuse workers and ex-Remploy workers who had taken advantage of previous redundancy packages.

The government has been Orwellian in claiming they are helping disabled people into work whilst sacking them from their jobs. In Preston the workers were shown 6 job opportunities to apply for, each of these positions turned out to already have been filled. One ex-Remploy worker had found work on the railways and promised 20 hours a week of work, only to be told upon arriving for his induction that he was only going to be offered a zero hours contract. END_OF_DOCUMENT_TOKEN_TO_BE_REPLACED

Spanish miners are now a month into action against the Popular Party government, and behind them the international banking aristocracy, as they demonstrate against 60% cuts in subsidies, which are expected to result in the loss of 40,000 jobs. END_OF_DOCUMENT_TOKEN_TO_BE_REPLACED

We got notice of the 10th of May strike on a Friday afternoon ten days before, in the middle of an emergency meeting about redundancies. The first response was “They have got to be fucking kidding.” There was a general expression of dismay and disbelief. So what is the problem? Why weren’t we pleased about being called out? END_OF_DOCUMENT_TOKEN_TO_BE_REPLACED

The GMB’s national secretary for public services, Brian Strutton, has signed up to the TUC-approved Government pensions offer, which surrenders to the government on all the core issues of the pensions fight: working far longer, paying far more and getting far less. There has been no change in the offer in the key areas. Final-salary schemes will be replaced by a career average which will result in huge losses, particularly for women with irregular employment history. Unison leader, Dave Prentis, long seen by Cameron as someone he could do business with, recommended the  deal which breaks with the momentum of strike action and solidarity against the Coalition.

Brian Strutton failed to inform GMB members that he had capitulated to the Government’s threat to impose a worse settlement than the one on offer. In an email to members he presented the deal, which undermines future action against the Government, as some kind of victory. What has been agreed is a ‘process’, he explained. What will be negotiated in this process? Well, he was unable to say. The details would be determined in the process. In other words, in return for suspending  strike action, the Government has agreed to talks on their terms. END_OF_DOCUMENT_TOKEN_TO_BE_REPLACED

by Alfred Stevens of Communist Students.

The 1,200 striking workers at Europe’s biggest food manufacturing plant, the Heinz factory in Kitt Green of Wigan, suffered the first defeat in their ongoing struggle against the management and owners of the company, as the senior stewards decided to call off the 24 hour strike that was planned for Wednesday January 4th. The workers had been planning to strike for the fourth time over management’s sub par offer of pay conditions, including the removal of the performance related bonus and restrictions on overtime.

In an unsurprising move, given Unite’s previous of trying to buy its members off cheaply, the shop stewards accepted management’s demand that the planned industrial action on the 5th be called off. The shop stewards argue that this was to allow the offer that management had called ‘final’ to be voted on by its members. The offer though is hardly better than the previous one, which the workforce voted overwhelmingly to strike against. END_OF_DOCUMENT_TOKEN_TO_BE_REPLACED

Despite the usual bosses’ claims to the contrary the PCS two day strike looks to have been solid and successful.

Offices were closed services disrupted all over the UK. Significant also was the size of the picket lines, full of ordinary workers not just the usual activists. This clearly unsettled the bosses as many lines were challenged – with no success! The mood was very determined and angry. END_OF_DOCUMENT_TOKEN_TO_BE_REPLACED

Readers of The Commune may be aware that PCS members have voted to take action over the threats to the Civil Service Compensation scheme. This in essence means that 250,000 public sector workers will be out on strike on 8th and 9th March.

The strike is hugely important. The issue is about making it cheaper to sack civil servants. Whilst it is always unacceptable to sack workers, the relentless purge of the public sector makes no sense at all in a recession, with services suffering billions uncollected in tax. Indeed even the London Evening Standard ran an article on public sector pensions, pointing out how low they were and that any attempt to reduce them would simply mean an increase in benefit claims and hence no saving to the exchequer. END_OF_DOCUMENT_TOKEN_TO_BE_REPLACED

More than 40 pickets were stood at the gates of the Hackney Community Transport (HCT) bus depot this morning.  Playing football, waving flags and milling about on Ash Grove, off Mare St, the strikers are amongst the worst treated workers on London buses.

END_OF_DOCUMENT_TOKEN_TO_BE_REPLACED

from Où va la CGT: see here for an interview with migrant worker reps and report on the occupation of the Pompidou centre’s restaurant

A month on strike for 5,000 undocumented workers in the Paris region: a month of mobilising people, strikes, pickets in the cold and in the rain. Their determination is unfailing, even if some are starting to tire.

But there is a problem with the direction of this massive, multi-site strike. Many reps are starting to question the manner in which the CGT union federation is guiding it.

END_OF_DOCUMENT_TOKEN_TO_BE_REPLACED 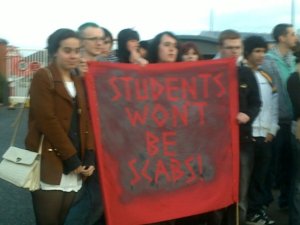 Members of the ‘Manchester Students Support the Postal Strike’ group stood alongside workers on pickets this week and shall be returning for the next round of strikes. For many this has been their first time on a picket line and it has been a good opportunity to learn from the Royal Mail workers about the bullying practices of their management. Despite the right wing press demonising the CWU a ComRes survey for the BBC found that 50% of people sympathise most with the postal workers and only 25 per cent with the management. This was demonstrated by those passing by on their way to work, and even Tony Lloyd, the Labour MP for Manchester Central, came down to show his support (ironically he has been a supporter of plans for postal service privatisation). END_OF_DOCUMENT_TOKEN_TO_BE_REPLACED

A bulletin for postal workers: click here for PDF. Print some off and take them down to your local picket line (or if not, visit your local picket line and show your solidarity anyway…).  If you live in Stoke, Stockport or Plymouth, you might want to go down to the picket line at one of the three MDEC centres that are on strike tomorrow (Friday).  On Saturday, from between 6am and 10.30am, visit the picket line at your local delivery office.   That’s the place you might have been to pick up a parcel if it couldn’t be delivered.  If you aren’t sure where it is, call 08457 740740 (a Royal Mail helpline) and say you’d like to know where your delivery office is (perhaps you need to pick up a parcel, but lost the calling card).

– Management are feeling the heat

– Public support is on our side

– Step up the strikes: don’t break action for talks END_OF_DOCUMENT_TOKEN_TO_BE_REPLACED

A new wave of strikes by undocumented migrant workers began on 12th October. The striking workers, greater in number than in April 2008, are determined to win regularisation for all. But to do that, they need solidarity from all workers.

That is the slogan of the thousands of undocumented migrant workers who are taking part in the new strike wave, initiated by the unions (CGT, CFDT, SUD, FSU and UNSA) and  associations (Ligue des droits de l’homme, Cimade, RESF [Education Without Borders Network], Femmes Égalité, Autremonde, Droits devant!! etc.) Since 12th October the movement has not stopped growing, from 1,000 on the first day to 3,000 a week later. There has been a qualitative and quantitative leap from the strike wave of April 2008, which involved 600 workers and won 2,000 regularisations. END_OF_DOCUMENT_TOKEN_TO_BE_REPLACED

The following piece was written by one of the Tower Hamlets College (THC) ESOL teachers who were on strike for four weeks until recently.  For context, it would be best to read our previous coverage – Lessons of the Tower Hamlets ESOL Strike – first.  The article is not current, though it has not previously been published.  It was begun at the end of the summer term 2009, has had a few updates since, and describes unofficial action taken at a training day, which included materials by educational theorist Lev Vygotsky*(whose work it is in no way necessary to be aware of in order to read the following).  The article shows the power of workers to make themselves unmanageable, and some real dynamics of taking assertive action at work in 2009.

Some local supporters witnessed an open air meeting of our union branch on Friday 3rd July where we had to take the decision of what to do on the Monday of the last week of work. Monday was not a strike day because it was planned as something more important. Teaching finished on Friday and the following week has always been a week of paid Continuing Professional Development – ‘CPD’ where there is a variety of sessions on offer and staff can choose what they’d like to do from a varied list of options including more practical things like learning new software programs or exploring new teaching theories.